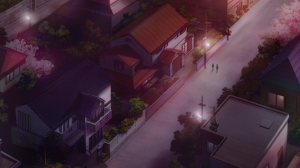 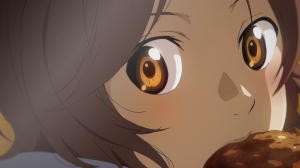 PLOT: Kōsei Arima was a piano prodigy until his mother died when he was eleven years old. The shock of losing her made him lose any interest in piano, and his life has felt monotonous ever since. Then, when he’s fourteen, his childhood friend Tsubaki introduces him to her classmate Kaori, a free-spirited violinist. Her enthusiasm reignites his interest in music and in life. -{taken from ANN}

Noitamina’s 2nd broadcasting title for the Fall season alongside PSYCHO-PASS Season 2! The PV for this series had me instantly hooked, I love the character art as it looks very similar to Honey and Clover‘s style, and the background designs are utterly gorgeous!  Music and romance these are the kinds of series that are far and few between but we’ve had some greats over the years especially in the 2000’s:  Nodame Cantabille, NANA and K-On!.

Ishiguro pulled together some amazing episodes with Hourou Musuko and Tonari no Kaibutsu-kun and now he’s on his directorial debut!  Finally!  A romance series that understands how to progress without all the fluff  by gradually displaying this authentic view of middle-school life as the focal point in maturing the 4 leads here:  Kosei, Kaori, Tsubaki and Ryota with such charm.  A relaxing series that evokes the power of music in enhancing this story!

I loved how this didn’t drag on with melodrama and just kept pushing forward with energetic comedy between Kosei getting hurt and Tsubaki’s subsequent apologies.  Ultimately this lead to the arrival of Kaori Miyazono, the down-to-earth independent violinist that would open up the door for Kosei in re-disovering the color in his life.  A show that doesn’t neglect what people go through.  With Kosei, having lost his mother prior to the start of the show left this huge weight inside his heart only to be completely enchanted by Kaori’s harmonious care-free attitude and as he put it:

“The Spring of my fourteenth year, I….I’m taking off with you”

So powerful and gave me the same appeal I had for Nodame Cantabille!  Definitely going to be watching out for this one for the Fall 2014 Season!

I must say GOOSEHOUSE is one of my favorites and they did some amazing work on the second ending theme to Gin no Saji’s 2nd season.  Here is where an acoustic band like this one works extremely well.  I can’t wait to hear what they’ve got for the full song!

Another beautifully written acoustic song accompanied by soft-sounding male vocalist Yohei Hashiguchi.  Love what this animators did here with the main cast as the backdrop for all those different designs in flowers and shapes.