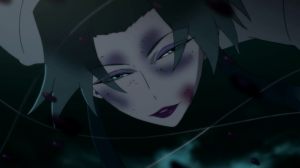 Two MAPPA series that have fantasy elements and set in Spain during different time periods–  it’s great to see Japanese anime handle this area of the world once in awhile.  We’ve had a ton of anime series set in Europe, Le Chavlier d’Eon, GOSICK, Fantastic Children and the list goes on, but finally we’ve got two series in one season that are based solely in the country of Spain.  This is great to see!

As much as I enjoyed the first episode this was exceptionally off to a good start more-so than the premiere, the animation, the music, the story just about every bit  of it came off smoothly here.  Monaca actually made an engrossing collection of music for this episode here considering how well the tracks were edited into those fight scenes in the second half!  I am pleasantly surprised by this show so far as it has thrown in the use of demons and monsters in between a war and political scandal.

Horrors the Makai Knights have this long held duty by eliminating them it all sounds so simple and the typical style of a tokusatsu series but this was way different than what I’d thought it would be after the first episode.  After the tragedy of the witch hunts there is this strong indication by Herman Louis that there is a lot more going on between the Makai Knights and how many suffered at the hands of Valiante than what was shown.  I loved how he had blamed the Council’s decisions on the death of so many Makai Knights and Alchemists only to be revealed by two things here:  a lack of communication between the Council and it’s members and the second being the fact that Mendoza was once a renowned alchemist by the Council.  Emma, the soon-to-be executed Alchemist by Valiante’s priest due to Herman and Leon’s distraction is able to break free and fight the sinister Horror Priest.  She was one of the better character in this episode as she shows no compassion for her comrades involved with the Council.  Can’t wait to see what more she does for this, and her voice actor Romi Park [Full Metal Alchemist‘ Edward Elric and NANA’s Nana Osaki]!

The level of turnaround this episode had between Herman not fighting the Horror and only was able to fend off his own son’s out of control Golden Knight Garo just shows how he might not make it out alive by the end of this series.  What is even a larger indication of this is Herman’s comment about finding a suitable son to inherit his armor Zoro.  Nice to see how the Knight’s armor is passed on from generation to generation as Leon got his Garo armor from his mother.

Speaking of mothers, the Queen is accused by Mendoza of poisoning the King and he also makes the insinuation that Alfonso might not be the real son of the King!  If this is to be true it will open up a huge dilemma for Herman as we’ve seen him sleeping with women in this show.  Could he be the father of Alfonso, and would he receive the title of a knight, how would the Queen let alone the whole country feel about this?

I also would like to point out how much the Horrors remind me of the akuma from D.Gray-man—  I get that kind of feeling with this show.  What a fantastic episode we had here.