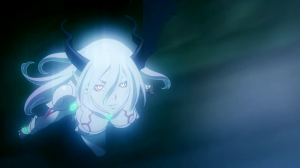 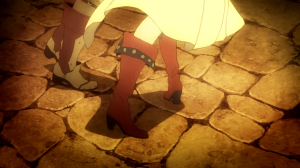 I want to point out the bad first, as I have a few issues with this show.  The amount of characters have been shoved in here in the beginning and in the end may have been confusing as we do not know their identity yet but the main problem I see here is that Bahamut might only get a 1-cour season.  If I recall, the last time MAPPA produced a series that had 2-cours was Hajime no Ippo: Rising last year, and if its any indication of how good their animation is here, then I cannot really see this going on for a 2-cour run.  It’s on a similar level to what we had with Zankyou no Terror this summer.  They have to run out of budget somewhere, but I will say this: MAPPA sure has made quite a name for themselves especially this year, you can definitely see that these were the same animators of Zankyou no Terror, especially with that incredible dance scene between Amira and Favaro.  The bridge scene was also animated extremely well and as for the story it has been interesting so far.

Favaro freaking out over his pact with Amira as he has a tail is solid start to any adventure involving fantasy elements.  I am surprised at how strong Amira is, because here the writers have introduced a few tropes with her–  the damsel in distress and her naivety about the world.  But in this second episode it paid off to the creators’ advantage greatly!  A complete reversal in her character as she understands that Favaro could be lying about a few things he’s told her, and that she is able to protect herself from knights that use magic.  Her innocence, and curiosity of the world as a human was a great contrast to her devil form–  almost as if she has separate personalities.

The comedy in this is genuine, and I loved the drinking scene–  Amira’s expressions was drawn amazingly well!  Favaro played off his charm very well and for most of it Amira was buying in completely.  Not only that, but there’s a sign of personal motives to each main cast member.  Favaro wants to rid his demon luck so he will do anything to remove that tail even killing her–  honestly though I cannot see this happening with his character, he acts too ridiculous to pull that off.  Kaisar wants to uphold his pride as a knight and will capture Favaro at all costs, which somehow I can see these two joining up eventually for Amira’s sake.  As for Amira she wants to be reunited with her mother pretty straight forward reason, but I can see that demon form getting in the way of that in some way or another.

The last time I’ve seen a decent series wrapped around a card-game based plot was Hikaru no Go, and Bahamut seems to use only a small portion of that into the show so far.  The level of talent we have for this is really good with MONACA in charge of the music, a solid director [Asura film, Tiger & Bunny]  and I had no idea that Hiroyuki Yoshino, Favaro’s voice actor was the same as Meow from Space Dandy this should make for a very fun adventure!

Fantastic visuals with some very neat penciled-in still shots!  This is accompanied by a heavy rock song with a mix of Japanese and English lyrics.  This song does not work for this show at all here.

Oh my goodness!  This is the best ending I have seen so far out of the Fall 2014 Anime Season!  Stunning visuals by director and animator Sayo Yamamoto that is accompanied by an extremely passionate song filled in with English vocals!  Love Shimizu’s voice here!  Fits Amira’s character very well, and the scene where she is twirling is so beautiful!