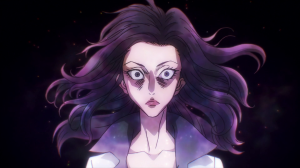 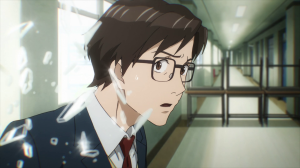 The second half of this was extremely intense and overall this episode did splendid work at the casting here.  Teacher Tamiya Ryoko is being voiced by none other than the amazing Atsuko Tanaka, from the popular Motoko Kusanagi from the Ghost in the Shell series!  The acting was very well done here!

I want to start off by saying this woman is frightening, and not in a psychotic killing sense, but psychological in that she finds the killing of humans less important than integrating with the social structure of humans.  She already recognizes that there is another of her kind within the school and that introduction with the entire school pulled tons of weight into Shinichi’s fear of him being exposed or even killed not to mention his classmates.  I hadn’t noticed this the first time, but that scene depicted a huge insight into Migi’s so-called meat plan later on this episode.  I was at the edge of my seat the first 10 minutes–  love how Ryoko provokes him by using her role as a teacher.  The confrontation in the office was spectacular as we’ve got a three-sided negotiation–  Shinichi playing up his humanistic nature by having qualms of their coffee meeting being a trap, Ryoko establishing the status quo by explaining her reasons for meeting Shinichi are purely scientific.  And then there’s Migi that instantly agrees to the offer for obvious reasons in understanding his species more.

As I have said before Migi has been the best character in this show, his disposition is intellectually calm, in that he is thinking way above and beyond human emotions.  Particularly, when he describes how close in meters his kind is to him and his partial host Shinichi.  I just love how we started out this show with a person who lingers with emotions, another that has rather level-headed thinking yet has not a single shred of empathy, and now a teacher with a mix of both for her own personal goals.  I’d say this was the best episode yet, as we understand now that some of the parasites yearn to be a part of human structure including sex.  That part where A-san is revealed to have slept with Ryoko illuminated that these alien invaders can adapt very quickly.  So she’s pregnant with a human baby, and yet she has this dissatisfied aura about her that she cannot create other parasites–  that we know of for now at least.

There is this large difference between her and A-san in how ruthless he was at eliminating anyone on site at that school and how she chooses to have her own identity concealed for the sake of understanding human life.  For Shinichi to have a parasite without complete control of its host will no doubt in my mind will end up having a huge impact on next week’s episode.  Can’t wait to see what Shinichi will do with that pipe!  And I feel bad for Satomi, when she got yelled by Shinichi–  this goes to show how now more than ever before he is willing to go in protecting the people he cares about.  In another sense it is a sort of evolution from human and parasite to something entirely different–  what that will be only future episodes hold.