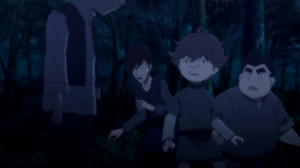 Another adventure episode for Herman and Leon, this great to see a fantasy anime bring int he important of minor characters!  The two MAPPA series set in Spain both have rather similar stories here:  Bahamut focused earlier this week on the loneliness of a child necromancer to relive her good days before the town became engulfed in evil by the book that turned the dead into undead.  Garo illustrates that show in a huge way here with a reversal–  instead of the undead being consumed with eliminating anyone who trespasses we’ve got real human beings with a slight skewed view of their own traditions.

The doll that Alois has been holding onto reflects how much hatred he has for the village after the misfortunes befell onto his father.  The mother played off Herman’s haughty advances really well here by laughing it off.  This goes to show how the episode director Masami Hata balanced the small comedic dialogue among the dark mentality this plot portrayed extremely well.  Alois for most of the episode acted strangely innocent about seeing what happened to his father and in understanding the level of uneasiness that his mother, Aurelia felt about the village.

Aurelia knows that there is something going on, and she is just accepting blame for it.  No wonder the kid was acting so out of touch with reality throughout this as he was just holding in all the animosity he carried around in his heart about the villagers.  Great way to feed the power of a horror as we’ve seen in small details here and there in previous episodes.

The village chief and even those kids amounted to nothing but fear of the Knights, Alchemists and really just about anything that could not be explained.  Alois consumed by the Horror doll {that looked very similar to the Furukimono in the first episode of Blood-C} showed a frightening depiction of a child scorned by the villagers that killed the very father he respected as an Alchemist.