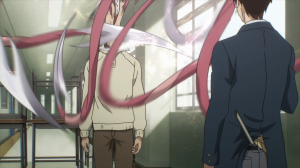 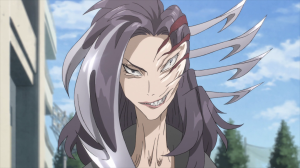 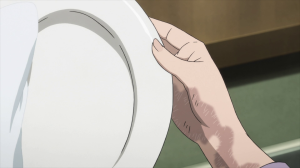 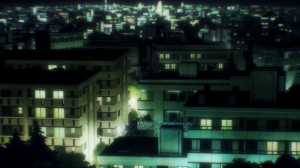 This is one of my favorite shows that I am watching this season.  We haven’t had a horror series that I can recall that was very good since Shiki.  It sure has been a couple of years since we’ve even had a show that handles aliens like this:  Level-E was more of a comedy series but still maintained this mysteriously engaging idea of aliens we had not seen before in a long time.

Starting out Ken Arai wrote a lot of musical pieces for Japanese television dramas–  I’ve actually been checking out his older catalog of music from 2010 especially his work on Shitsuren Chocolatier.  His song marble from that is astounding as he’s really defining a sense of style–  techno, trance, electronica and techno.  Kiseijū‘s soundtrack is heavily influenced by his work on the Last Hope score–  is it just me or do some of his works sound like a cross between Teddy Loid and Taku Takahashi?  Kiseijū sure has pulled off one of the best soundtracks of the Fall season so far.  The music flows just right with the animation by Madhouse and the enthralling plot–  I’m surprised by this because Ken Arai is making his debut in the anime industry with this show and he’s doing an incredible job!

Picking up right after that insane cliffhanger the fighting jumped right into the action between Shinichi and A-san.  Migi’s explanation to Shinichi about them being a pair is the advantage that will save their lives in their fights against other parasites.  The table leg dismantled A-san’s understanding of humans–  he underestimated Shinichi being a threat even more than he had before which drove him into a corner.

Here is where we finally get a chance to see what kind of parasite Ryoko is going to be which ended up being a fantastic build-up to her abandoning the human side of herself–  the Ryoko Tamiya that carries a baby and where her resolved changed from scientific purposes to devouring a species.  A killing intent that will very likely be a threat to Shinichi much later on.

The multiple morphing that she revealed contrast very well throughout this episode that the humans are gradually understanding that these human hosts are acting strange–  Ryoko’s mother noticed and when she tried calling the police at the apartment resulted in her death.

Now there is this facet of this show in full bloom here–  family relationships.  Nobuko, Shinichi’s mother was slowly starting to think that Shinichi isn’t acting like his usual self as we’ve seen hints of this since the very beginning with him being hungry to even saving insects that he initally was scared of.  Certainly a dynamic to this show that warrants a few death flags for its characters which I will say that Nobuko’s flashback was handled very well with this idea in place for the future.  It sucks, but I can really see her dying in the next episode, that scar she has on her hand foreshadowed this quite a bit.