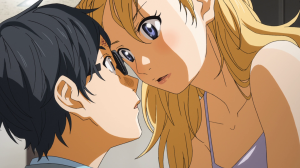 Director Kyohei Ishiguro surprised me here with an understated romance series between middle-school aged kids and classical music, it’s strange to see this as he wrote a few episodes for C3 and the Amagami series.  This episode sure quite an impression on me of how well he was able to control the emotional levels of these characters.  Speaking more so on Kaori and Kousei than the others as we’re finally getting into understanding Kousei’s past as well as Kaori’s drive to be remembered for her style of playing here!

The production values for this anime must be ridiculously high and I can’t wait to see what the Blu-rays look like for this!  A-1 Pictures has used a rather large budget for their series this past year–  Gin no Saji, Aldnoah.Zero, heck even Sword Art Online II had very pretty visuals but this was not only faithful to the manga but provided some wonderful color tones that gives the story such life.  What made me think of this was the concert scene that was so prevalent this episode:  Kousei trying his hardest at playing to hear the notes while stuck in an abyss, Kaori’s violin playing, even the minor characters movements throughout were so fluid in animation!

This wasn’t even the best part as this episode touched on Kousei’s fear to get back in the world of music after his mother’s death, and when he finally decides to play it’s sink or swim!  He is gradually realizing that he is caring for Kaori here through her ability to play the violin, and this was established throughout their competition scene amazingly well!  Nodame Cantabile had a similar style–  which I admit was one of the best aspects of that series that I loved so much.

Noitamina is delivering again with a beautiful series with some very engaging and funny fantastic leads.  Kousei reminds me a lot of how Kaoru Mishima was in Sakamichi no Apollon—  they both have timid personalities.  On the other side of this is Kaori, a young girl that speaks her mind when she wants to, and is brash in her behavior which impacts the musical performances we’ve seen so far.  Her disregard for the rules of competition were blatantly overstated here but when Kousei broke out of his shell this resulted in an entrancing battle between soloists vying for affection for each other!  Powerful stuff, and that ending must be foreshadow for what is to come, can’t wait to see what happens next!