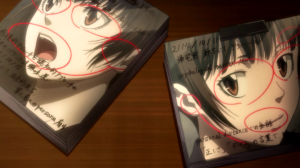 The twist to move Togane into a direction that’s not on the same path as Akane will certainly lead to adding more depth to Shimotsuki.  She’s taking everything at face value just as Akane did when she was a rookie, but more annoying in that here she witnesses Togane pointing his dominating questionably at Akane under the direction of Sibyl makes a ton of sense.  After Akane’s declaration against Sibyl at the end of season one, the question remained how Sibyl would handle having her stay on board within the Bureau under close watch.  Togane might be just like Kasei, a Sibyl-created robot to establish order within the Division 1.  It’s creative but I can’t say I like this just yet because it’s too convenient.  However, it does make me wonder if he has anything to do with Kamui’s scar after seeing that conclusion–  was that Kasei in the picture with a young Togane?  Could she even be his very own mother at one time?

Predicable to say the least, that there is someone within Division 1 acting under Sibyl’s rules.  After Kasei’s conversation with Akane previously regarding Togane, I can see this most likely being the case.  The disappointing reaction she was having towards Shimotsuki’s tantrum about Akane’s ways in dealing with bureau related matters pushes this even further.

This show is going to be only eleven episodes and i’m a bit worried for the other enforcers we’ve been introduced even here–  cannon fodder is what’s probably going to happen to these guys.  Feel bad for them, but if Kamui had sacrificed so many others including civilians before, what’s to say he wouldn’t go this far again.  Also still think Sho has something do with Kamui considering who his seiyu is.

The first half focused largely on how the inspectors Ginoza and Shimotsuki were trying to overcome the death of Aoyanagi and Shimotsuki’s suspicions of Togane that it mislead where the plot is going with its villain[s].  We’re slowly being pulled into the rookie of this season understanding that she can begin to trust the people she works with.  At first she has complete faith in the Sibyl System only to witness the horrors of what those dominators are capable of doing to innocent people, what a way to turn this around here.

The situation at the drone facility utilized an entirely unique concept by implementing a social media mobile game to control the drones in order to kill people.  This just indicates even more on Kamui’s idea to have Sibyl destroy itself and heavily laid on the possibility of Kamui being Enforcer Kagari from season 1.  It might be a long shot but, Kagari was obsessed with video games and was taken out by Kasei and the question remains was his brain gone, or pulled out from the state of Sibyl as a new person just with a slightly different personality?  The skin that Togane found certainly explains how Kamui’s been able to remain undetectable by Sibyl but not why.

If I recall, the book Kogami was reading at the very end of season 1 was Proust’s Swan’s Way, and if Makishima’s collection of novels in that season had any indication of its plot then this book should foreshadow a lot if not a little bit of what the plot is divulging itself into.  Proust’s novel depicts this encompassing theme of recreating the past through memory, and with Psycho-Pass 2 we’ve got a villain so far that’s used holograms, chopped up body parts, tested out the design mechanisms of dominator’s and his determination to make society clear of the system.  See the correlation here,  Tow is using what writer Urobuchi excelled at without the hackneyed use of quotes, good to see this turning around slowly but surely in regards to that.