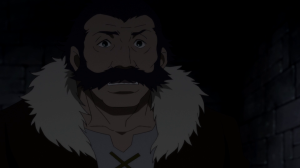 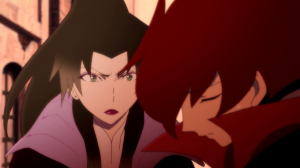 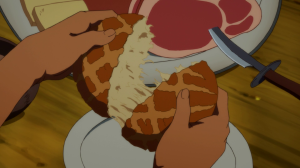 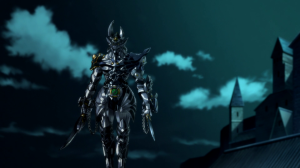 I’m not sure I’ve talked about the opening but its very different than what we have compared to other opening animations this season.  I really like style to this–  reminds me a lot of what Yuasa’s Kemenozume had been in drawing style and music production.  I love that animator’s works and with Garo the opening director has never worked on an animation production before.  Masatsugu Nagasoe, normally a music video director helmed this alongside key animator Tomoyuki Niho of Ping Pong The Animation earlier this year.  It’s definitely up there for one of my favorite openings of 2014.

As for the Garo episode director we’ve got someone fairly new here–  Shigeru Murakoshi wrote a few screenplays for the anime adaptation of Sidonia no Kishi.  Really if it wasn’t for the jerky CG animation  by Polygon Pictures I would have really enjoyed that series a lot more than I did.  In retrospect, MAPPA has turned Garo into a style similar to Mahou Shoujotai right down to the character designs.  It’s simple and well-structured, easy on the eyes which makes the heavy story that much more interesting.

Also want to point out that this show is quite spectacular in how it unfolds its story around the characters–  the use of political gain by Mendoza to control the land behind the scenes with Horrors adds a ton more depth to the innocent humans of this show as well.   We were briefly introduced in earlier episodes to this formulaic theme, but as we see Leon and Herman encounter these demonic creatures it really paints us a bigger picture here.  That the acquisition of these Horrors sn’t just Mendoza’s influence that has swayed so many humans but the evil beings themselves!

We saw a lot of this in Leon’s fight with the priest, the kid who held onto the doll where his very own father was cast aside by the townspeople, the Alchemist-in-training Marcelo and from what looks like with the conclusion in this episode, a Makai Knight.  There is a pattern that we are seeing with this, and we once again we are gradually getting this larger view of it with the sword that is left behind by a dead Sergi, the blacksmith’s son.

I like how they’ve made Leon and his father travel around but this was too coincidental that Herman and Leon found themselves in Santa Bard with another Horror case so quickly.  It’s episodes like these that have a double-edge sword:  the overall premise is intriguing but when it comes to the convenience of every piece coming together it isn’t as powerful.  Too easy for for the situation here.

One part of Garo I absolutely love is the comedy–  it’s not so flashy and it unwinds in such a way that is old-fashioned:  more so with Leon than his father in this episode.  The women fawning over him and want to steal from him, Ema’s comment about him possibly being a virgin might illustrate that he will end up with her later on.  Like father like son, and I wonder how he will react when he meets his cousin Alfonso.  Garo doesn’t take situations lightly with its kids, they go through pretty harsh stuff, and the kid Julio witnesses his boss undergo a monstrous change and be killed off.  Julio’s desire to be respected just like his boss plays on what Garo excels at:  humans manipulated by demons never forgetting who they really are.

This series is going to be 2-cour and with how elaborate Amemiya is at crafting his stories it is only fitting that this series should receive this length of treatment.