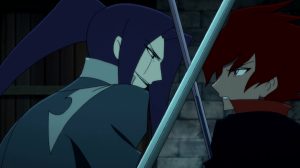 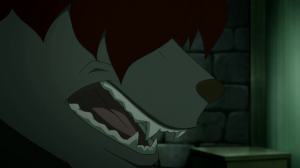 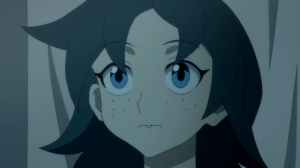 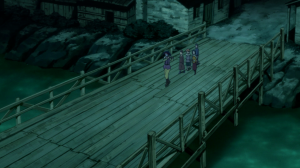 This series is very underrated and it is good to see this actually getting a simulcast release considering how there is only one fansub group working on this.  If this show were to air around five years ago it would have been very difficult to see a release of this outside of Japan. This is definitely one of my favorites of the season alongside Mushishi Zoku Shou, Kiseijū and Shigatsu wa Kimi no Uso in that it is slowly exposing its characters motivations around a fantastical narrative through the use of a basic style of animation.

I love it when episodes do this–  create a combined story told from different perspectives.  This episode WAS in fact very obscure–  mistaken for Prince Alfonso, Leon is chased down by the knights of Valiante and ends up in a fight with the mysterious Makai Knight we were shown alongside Mendoza in the previous episode only to lose the battle and end up in a wildly ambitious collection of supposed dreams!

This episode had some of the best direction I have seen all season:  the melancholy music matched with superb atmospheric sound effects very well and the dull and faded look the animation had here allowed for a rather eerie episode.

THIS WAS ONE AMAZING EPISODE and what amplified this even further was the next one [I will talk about in my next Garo post] which further enhanced the world that these people are built around so well!  Something I may have mentioned before about Garo is that THIS is an anime that knows very well how to polish its minor cast of characters.  It was this aspect that continued this trend all the while maintaining a large focus on Leon!  Here we had the mistaken Pepe for Leon from the villagers, the frightening tales of the Werewolf that starts off with Leon turning into one to end by showing that the real Pepe is in fact a Horror!

It was almost as if the writers were trying to cram two episodes into one here, but the way that the script was written it paid off extremely well!  Sadayuki Murai wrote one amazing story here and I can clearly see his style from Moryou no Hako poured into this Tokusatsu original series.  Here’s an interesting fact is that Murai even worked on one of the strangest episodes of Cowboy Bebop— the episode about the assassin Mad Pierrot. This guy should have penned the script for Samurai Flamenco as I could definitely see some major improvements in that show through his style.

Agatha portrayed the innocence as this grim plot was moving forward and her unceasing belief that Leon was her brother Pepe gave off a slightly haunting power behind what these Makai Knights can actually achieve.  Leon crippled by his past never letting go of the trauma he faced earlier on had caused the flames of his Garo to form developed a complete turn around in a previous episode where in order to control his power he must give his life every new moon to the Madou Ring.  Here it illustrated this point in a very subtle way by introducing the Makai Knight towards the beginning that Leon faced off with to challenge his own inner demons which results in all the obscure situations that happened in the second half including this overarching idea:  some of the side cast of characters are not what they seem even if they aren’t a Horror.

This isn’t the first time we’ve seen people hide horrendous events from their own people–  the sacrifices including Alois father from episode 4, the blacksmith from the previous episode, the church Lograja’s hidden secret of selling children down to Mendoza’s overall power over the Horrors he controls throughout the land.  Its this idea that continues maturing Garo into an exceptional piece of work that can switch between episodic content at first glance but underneath it all adds up the layers for intriguing characters and an engrossing plot.