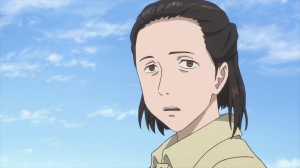 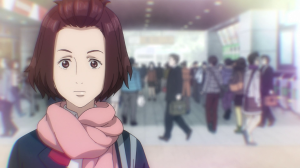 THIS. THIS RIGHT HERE IS MY FAVORITE SERIES OF THE SEASON!  The manga was written around the late 80’s and we’re finally getting an adaptation of it–  I’ve been waiting for a horror series of this kind to show up for quite some time now, and this is definitely it.  Every week this show is able to capture Shinichi’s transformation away from humanity so well that it blows apart every other series that we’ve had this season out of the water with it’s engaging story, characters and production values.

He’s been afraid of critters ever since he was little and now that he’s got one influencing his decisions and changed his life entirely he winds up pushing away Murano, killing other parasites and removing his compassion to replace it with a desire to kill his mother-turned-parasite!  He was weak before, but since last time we were shown he’s gained new abilities and new ways of coping with death–  I wonder what his own father would say if he ever found out the truth about Migi.  Now as for the beginning it was no surprise to say the least that the parasite he had detected turned out to be someone other than his mother Nobuko.

Mamoru is not the typical sidekick character you would see in a series so action packed like this one but all of what we had here worked out incredibly well!  We’ve had some strange human hosts in the past and this guy was refreshing to see because he’s the complete opposite of all the other parasites that Shinichi’s come across!  He has compassion and is a worry wart that compromises his Parasite time and time again which the flashback provided a great deal amount of depth to his personality.

For one thing, I didn’t see coming at all was how well the two of them faired off against Shinichi’s mother, an intelligent parasite that can switch forms really well.  It took me a second viewing to notice the impact of Mamoru’s courageous breakthrough–  in the beginning when he acquired Parasite.  He fell along the cliff while in his fight towards the end of the episode he is knocked off by Nobuko and gradually gains the strength to climb back up to attack his fears.  Protecting Shinichi in the process from taking his own mother’s life.  Great direction with that entire scene!

Also glad that the creators didn’t beat the horse with this story thread–  Shinichi’s intense motivation to release his mother from a life after normalcy, in other words a parasitic life.  Any longer and the story would have led to a rather sluggish pace leaving to a stale conclusion.  Glad to see that wasn’t the case here.  We don’t really need recaps for a show like this because Migi’s concern about the changes within Shinichi and himself reinforced what we saw in the previous episode and it was through the middle part of this that the writers were able to establish how perceptive they are regarding their own species growth and gradual metamorphisis.

I want to mention the music for a moment, Ken Arai is doing a tremendous job at using dub-step to elicit the supernatural themes of this show–  when Migi fell asleep to Nobuko’s realization that it wasn’t Migi doing the fighting but a human that has undergone a tremendous alteration with astounding dexterity.

Absolutely loved the ending there, Kana senses Shinichi’s return back home and Murano chasing after him for a warm welcome–  good contrast to all the hell he’s gone through these past few episodes.