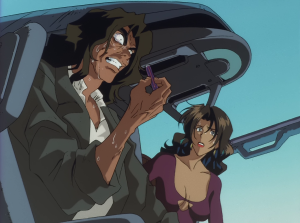 I walked into this screening as advertised with the English dub listed as the official audio track for this special presentation but as soon as the opening began it was in japanese with subtitles.  In amazing that 7.1 surround sound across a giant screen in Blu-ray format.  It has been about a year since I have seen a whole entire episode of Bebop in Japanese so with this I was pleasantly surprised.

As the story opens up we are introduced to Asimov Solensan, a drug dealer and criminal along with his girlfriend Katarina–  what makes these stories so popular is how stand-alone some of the episodes are as we are given a glimpse at Spike and Jet and the adventures on the Bebop by putting them in the background and giving the main focus to the episodic characters of this series and even this episode!  This worked out very well here because it moves at such a pace that doesn’t leave the viewer bored between long conversations about Bloody-Eye and the numerous agencies wanting to sell it on the streets to action-packed shootouts and dogfights between the police, Asimov and the Bebop.

Yoko Kanno may have written the greatest soundtrack she’s ever done in her career with Zankyou no Terror but without the fantastic music of Cowboy Bebop we would not have all the incredible musical pieces as we have today if it were not for this series!  Come to think of it, after having seen Space Dandy I can see the amount of influence Kanno had on director Watanabe with both series when he gathers different staff to work on episodes.  Here we’ve got a really strong episode director with Yoshiyuki Takei from Vision of Escaflowne fame and helmed probably the strongest episode of Kidō Butōden G-Gundam from the early 90’s.  The animator of Michio e Hatchin‘s final episode developed the designs for this and very much captures as a whole how the anime industry has changed as technology has advanced over the years!  Akitoshi Yokohama is a really talented animator I say that because he’s so versatile from going between series–  Rahxephon and Photo Kano to series like Kemenozume and Kill La Kill!  Incredible!

For Cowboy Bebop voice acting has always been memorable both in Japanese and in English but what shined especially in this episode was how subtle it was.  No overacting that a ton of shows even today suffer from as this presented a very different feel that makes you feel like you aren’t watching anime.  I mentioned before how well-written the script was for the English dialogue of this show but I have to hand it to the Japanese cast for delivering really strong performances–  Kouichi Yamadera [Spike Spiegel] gives off a mix of low and higher sounding pitch compared to Stephen Jay Blum’s hardened smooth tone.  Both are really good voice actors in their respective countries as what this episode succeeded in doing that most series fall short in is pacing.  For this episode we had two very special seiyu, Rintarou Nishi [Asimov] and Yurka Hino [Katarina], both are doing two underrated yet very good shows this season– Amemiya’s tokusatsu series Garo and Chibli’s first television series Ronja based on Swedish author Astrid Lindgren’s novel of the same name.  It’s really cool to see how much their voices have aged over these years and yet they are still able to deliver some amazing performances!

There wasn’t a lot thrown at us as we were show small details of the jobs of bounty hunters, crime and the life that Spike and Jet lead against the backdrop of the Tijuana asteroid colony.  This world reminded me a lot of the towns from Trigun and considering how Bebop got released after that series I wonder if there was some influence here.

Great introduction to a compelling series that provides us with a bigger picture overall that even made Space Dandy so amazing–  the Bebop crew encounter different people throughout different worlds where each episode is varied, some are action-packed, filled will romance, intense thrillers but at the end of it all we are taken inside their travels of making money and living life.  Truly an exception series.

OP: “Tank!!” by the Seatbelts [arranged by Yoko Kanno]

One of the most popular anime songs ever, and in my list of favorite opening animations of all time!  This song doesn’t use vocals but a style of bebop which is largely mixed which here is used to its full potential!  A sense of pizazz by incorporating dark tones mixed with bright backgrounds against a very rambunctious and ambitious jazz score reminiscent of the early days of Latin music! A fantastic overview both in imagery and musical performance of what this series themes are truly about!

[arranged and composed by Yoko Kanno]

This is by far one of the best ending themes to an anime series ever, and I can’t find anything wrong with this as it uses japanese vocals by Mai Yamane to bring the story of Spike’s lost love into the picture with such passion!  There were a lot of talented international staff members that helped bring this to life including recording engineer of Mile Davis, Rudy van Gelder!