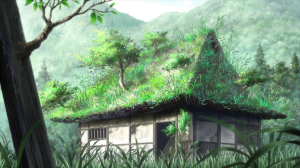 Yes!  The “Path of Thorns” chapter finally got animated and this was incredible and I am really glad the creators used the production delays to further the potential of this story here in order to bring both parts as a closure for the first half of Zoku Shou and probably one of the saddest tales in the series.

I know I haven’t given this series the attention it has needed considering the airing of this in Japan will be concluding by the end of this month and I’ve yet to even begin writing on it or even watch it.  Mushishi is a series that is scarcely unique in that it’s hard to get into.  Especially so when this season is loaded with quite a huge selection of action-packed and intense anime that end up being highly entertaining.  The Fall 2014 anime season that contain series with pretty animation and strong music around a solid plot–  Kiseiju, Shigatsu wa Kimi no Uso and Garo are the shows that signify this extremely well.  However, Mushishi is by itself here and this is not a bad thing at all–  it’s  a relaxing series that once you do begin an episode you get caught into the atmosphere and the complexity of its characters and the emotions they have through the situations with various mushi.

An hour-long special provided a great end to the first half and a tale that tackles a Mushishi’s perspective on human lives and the effects Mushi have on them both mentally and physically that asks one question.  Is it real?  I ended up watching this twice because of how drawn out the story was here and at first it was hard to follow.

The transition between Kumado’s past and how him being led by the clan elder allowed for the authenticity of this series to seep through really well.  If I recall I think I have mentioned how well this series casts its seiyuu and here it was no different as we had an 83-year old clan elder teaching this young 10 year-old Kumado in discovering his destiny within the Minai clan.  Also would like to point out the amazing young actor here is–  Nishida Mitsutaka the same seiyu of young Peco from the spring season’s Noitamina anime Ping Pong The Animation!  And the only roles this young boy has ever done so far, can’t wait to hear what he does in the future!

The explanation of Tama who is also the narrator of this series and the only other reoccurring character every episode aside from Ginko illustrated the level of seriousness that the Forbidden Mushi‘s calamity would bring to humans and the world that they are both trying to live in.  The hatred that Kumado has for Mushi could not have been developed this way if it were not for his conversation with the clan elder’s eventual request to eradicate this catastrophic mushi and his relationship with the vessel of the Karibusa clan, Tanyu.  Living a life of tranquility that turns out to be a lie in itself as the people around them in this case, Tanyu noticing that Kumado acted as an entirely different person when he came back from time to time presented the issue quite clearly here:  Kumado is afflicted with a mushi in some form or another.

Ginko also played off this well because this is the first time we’ve seen him interact with another mushishi so closely and at the very beginning there is this harsh set of feelings between the two of them.  Kumado gives off this foggy sense that asks one pertinent question throughout– what is real?  This was enhanced greatly by the childhood scenes between him and Tanyu even more so with the result.  Ginko holding onto a letter from her asking for Kumado’s help in the matter.  His reluctance to work with another from the same profession ventured this show into a new realm and that is into the interpersonal relationships these clan members have of each other.

Amplifying this even further had to be Tama’s remorse for the Minai and Karibusa clans that are fated to become vessels in a sense.  As this episode describes the vessels as the carriers of the Forbidden Mushi this looked to me as though it was a double entendre: One being that the vessels that cripple the life of its host in order to hold the Forbidden Mushi as pre-determined by the Minai clan.  The second underlying meaning is that there are other vessels like Kumado that are containers of a fake soul created by the Karibusa that devour mushi in exchange for their lives.

It is these desires to manipulate and extinguish the livelihood of mushi just as the Forbidden Mushi had done in the past towards humans that embellishes the theme of survival here in a very surreal way.  It is also this point that made the ending absolutely incredible as it lifted Kumado’s resolution to save Ginko from the Saneuki [a giant black pebble-like hand] so much with Ginko serving yet again as the focal point when it comes full circle.  A collection of themes between humanity, survival and emotion and Ginko is used to bring into focus Kumado’s re-collection that he’s very much a Sanekuimushi and how that affects the human connection between him and Tanyu.

Universally, its characters like Kumado, the episodic characters that bring vitality to the unexplainable aspects of this show that keeps Mushi so enthralling not just in this special but in the entire series.

Also want to point out how much I liked the part where Kumado went into the path of thorns to investigate and he initially believes the mushi are dead–  great allusion into what he actually is: an empty soul.