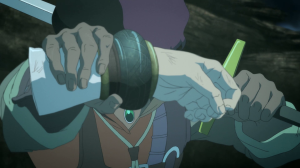 The swashbuckling adventure series by MAPPA finally comes to a close and this could have been one of the most satisfying 1-cour endings we could have had.  It tied everything together wonderfully here especially by hardening the fact that Lavalley and Martinet are the same person.

While it might not have been the most creative way to utilize Lavalley as the final villain here but it did work out in terms of pushing this story at a quicker pace in such a limited amount of time.  Even Bahamut who was the main crux of Shingeki was able to handle Beelzebub to such effect that Azazel could redeem himself–  giving his character closure.  Speaking of wrapping up the people in this series Kaisar turns out to be one of the strongest characters in this–  he shoots his friend Favaro and ends up freeing him from his manipulative and somewhat comedic lying which reflects with the expression on his face towards Amira at the end.

The duel between them ends up being what Shingeki is trying to convey as a genre–  a stage play.  Two bandits on a journey both of self-discovery to fill their own desires and yet they come across tons of fantastical obstacles that ensures this series as highly entertaining.  Would like to see the same staff including the director here write an anime for the Brothers Grimm because that is definitely what I got from this finale.  When Kaisar gets his hand cut off by Favaro it really displayed the strong bond they share as friends and more notably how this friendship matures as the story moves along.

One of the few parts of this I could not seem to grasp was how little Bacchus and the duck Hamsa were shown throughout this and finally they receive the screen time to actually do something useful–  this is where this show could have improved and where the finale lacked substance as we had a small amount of detail known about these two characters.

Amira stuck within Bahamut accepts the amazing journey she had with Favaro and their own bond they share–  an adventurous love.  The kiss signifies this point to a large extent even where she appears from Bahamut’s eye and disappears into it depicting this idea of the “eye of the beholder” both literally and figuratively towards Favaro.

Nonetheless this was a conclusion to me that was delightful, beautiful to the viewer’s eye and a whimsical action anime series that aims at delivery themes that hits all the right notes on friendship, love, good versus evil and the supernatural.

Also if the ending card sequence of “I’ll be back” rings true than we might see another season of this sometime in the future!