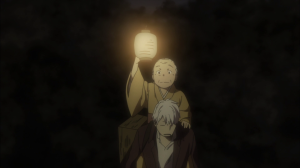 Ringing in the new year with another Mushishi post.  I was hoping that I could finish up with the Fall 2014 season before January 1st but that does not seem likely.  However I do hope to at least continue on through these posts and once I get to a good stopping point I will discuss the Top 10 2014 Anime series and anime series that I will be covering for the Winter 2015 Season.  I hope that all of you are enjoying your New years and look forward to seeing what 2015 will bring us.

Mushishi is back again and week after week it continues to be one of the most surreal series I have ever seen.  This time with a young girl Akane having gone missing due to the confrontation with a shadow-like mushi that involves Ginko in a rather comedic turn of events at the start.  The music has also been strikingly different and if I recall this is the first time in Zoku Shou that presents itself with a light-hearted story about an older married couple and the relationship they’ve carried together for years including its deep secrets whether they can be remembered or not.

The previous story was about a man reliving his life through a winding tunnel mushi only to forget the most important aspects of his own life, and here is where the author’s point about forgetfulness comes across here in a rather vastly distinct style.  Mikage cannot remember a lot of her past from when she was a child but it’s Youkichi that bears the heavy burden of knowing in his heart that Akane the girl she loved from so long ago disappeared and now ends up spending his life with the suddenly appeared young girl Mikage.

Fast forwarding to the present brings us to  Youkichi’s discovery by Ginko about the Oomagadoki–  the featuring mushi of this episode that only appears at dusk and anyone that is sucked in by it switches places with its shadow.  This is the reason why Akane has lost her physical body and Mikage replaces her.  It took me two viewings of this to catch on that Mikage struggles with remembering her past about Akane ONLY at dusk which portrays an out-of-body experience traversing across time and space for the two of them.  The mushi throughout this  season especially have been able to establish a connection of strange occurrences within humans;  however this time around its more-so a reflection of the humans’  past that sway that ambitions or rather motives or these supernatural beings.  Also, I think it really helps that the animation has remained the same since the first season to get this huge idea across.

One huge impact this has on this episode most notably is how the past figuratively can cast a long shadow onto this married couple and the feelings of remorse that acts as weight for the two of them.  In the literal sense, it’s Akane’s shadow that creates a rather physical meaning that rests in the back of Mikage’s mind and without question in the village.  Perhaps this is also why there is so much influence of mushi affecting the other villagers having ailments as we see Ginko curing them of old knees that ache.

Really like how Youkichi has buried deep within in his heart a set of tightened feelings of regret regarding Akane which right at the end here reaches its peak potential!  He visits Mikage’s grave after some time has passed and notices Akane’s shadow only to step on it as she’s running away from him so that she may live for all the time she’s lost.  This plays out spectacularly well because Youkichi has already lived a full life with Mikage and by removing himself from the physical world he will absolve himself of any blame he feels of living with the very woman that stole Akane’s:  giving her a chance to feel very much alive in the way that mushi do every episode of Mushishi.