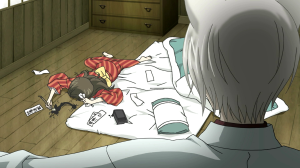 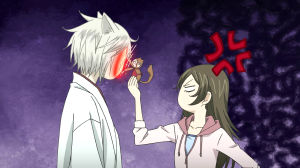 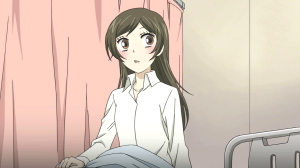 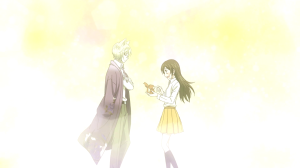 My first anime of the winter 2015 season is here!  Two more episodes of Mushishi to finish up, a few more of Shigatsu wa Kimi no Uso among others, I’m going to be quite busy for the next couple of months.  Perhaps I should have said until summer hits considering we’ve got some great series lined up for April as well when the Spring 2015 season begins too with Punchline, Arslan, Trigun author’s Kekkai Sensen are to name just a few!

Looking back, 2012 was a great year for romance series with Sakamichi no Apollon airing in the spring season, Natsuyuki Rendezvous [this series had some of the most realistic dialogue I’ve heard in recent years] in the summer and four very well-done comedy romance series.  Bakuman season three, Suki-tte ii na yo, Kamisama Hajimemashita‘s season one and last but not least my favorite comedy of the Fall 2012 season Tonari no Kaibutsu-kun.

However there is a lot to love about an anime that uses supernatural elements to develop comedy–  it knows when to pull the punches and when to stop.  Fans of the first season will enjoy this second season’s introduction episode a lot, as there is only one small quick recap or rather a rundown with a grainy video told from the spirits Onikiri and Koetetsu.

What was even more surprising here is how quickly the writer for this episode utilized every minute of establishing the Shikigami Mamoru, Mikage’s disappearance still bearing a weight on both Tomoe and Nanami and Otohiko’s [the english voice actor for him in the first season is to my shock Ian Sinclair that does the voice of Dandy from Space Dandy!] return!

While this was returning to its roots of gods, demons and the romantic and sometimes comedic situations between Nanami and Tomoe it provides a nice backdrop in bringing in new characters.  Although as rushed into its first half might’ve been here especially at the shrine with Mizuki showing up from time to time this episode was a nice refreshing re-entry into this supernatural shojo series!