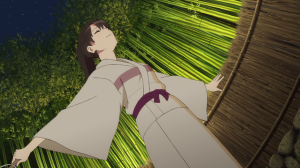 PLOT:  The life of Tomoyo Aki, a highschool otaku working part time to support his anime Blu-Ray disc hoarding. With remarkable luck, he bumps head-first into, Megumi Kato, the most beautiful girl he has ever seen. Naturally, the meeting twists his life into a complicated torrent of relationships. Eriri Spencer Sawamura, his half-foreigner childhood friend who’s always valued her relationship with MC. Kasumigaoka Utaha, a cold, composed renowned literary genius who shoves everyone aside from our protagonist. What is this? An eroge introduction?  The tale of a small not quite doujin circle, but not quite indie studio’s journey through the tough territory of comiket and beyond. {taken from MAL}

I’m a fan of Noitamina’s broadcast works but they need to churn out some more original material.  Curious about Punchline next season and some of the other mysteriously announced titles like Game of Laplace.   Now moving on to this episode. The premise sounds intriguing about an otaku actually living out the very dojin game that he wants to develop but sense a feeling of nostalgia coming on with a certain series from last year.  Ryuugajou Nanana no Maizoukin.  Hope the same director of that series knows what he is doing here with this show.

It sounds fantastic and A-1 Pictures provides some of the strongest and prettiest animation of the season yet but the camera angles here were very SHAFT-like.  Back in 2009, I enjoyed the wittiness and sometimes dry-humor of Bakemonogatari, but after about 4 seasons of it there’s only so much writers can do. Sometimes this works and other times it can fail.

With Sodate-kata, I can see this influence from the monogatari series quite a bit from the animation techniques they chose here–  almost as if the breast and butt shots were intention for the sake of drawing in the viewer of what this show’s main dojin that this circle of girls around Tomoya is going to be about and that’s pretty clever. Putting aside all the panty and breast shots we had in this: from time to time in this episode there are these off-camera shots that took away the overly-cute effect by showing parts of Utaha, Izumi , Eriri and Michiru that weren’t pivotal for that specific scene.  Whether it was talking and the girl’s face is cut off from the viewer or the part where Michiru body slams Tomoya in the water.  It’s these things that this show is trying to cater to by overusing the adorable idea but in various directions and it comes off purposefully humorous and ingenious especially for the only guy in the group Tomoya.

Here we have a prologue episode–  a lot more series seem to have this trend lately with an episode zero.  This can be a great chance for the viewer to really get a wide glimpse at what the show will offer in animation, music and overall presentation that doesn’t take a hit to the real focus of the story.  Just something that adds a little extra.  I wonder if the actual first episode let alone the entire series will have as much fan-service as this prequel did.  Feels like the reason the creators did this here was to establish a joke that this will be a show about a dojin with numerous girls yearning for the main guy. If it was then this was a smart move.

The story here did something I did not expect by taking a plain girl, Megumi without much talent even when it came to her personality and portray her as the main heroine!  All the while keeping in mind that Tomoya wants to design the lead female after this girl and the others are vying for his affection on and off-screen. Knowing Kanta Kamei’s track record as a director he will probably bounce back and forth between comedic and dull progression with the humor aspect of this anime.  Hajime Hyakkoku’s soundtrack didn’t have any pieces that stuck out for me here.  It wasn’t bad but it wasn’t horrible either.  Hopefully this will get better as it goes along.

Gorgeous visuals and I loved the part where Eriri shows off her artist skills.  Sums up what all the girls jobs are going to be in the creation of the dojin game.  Haruna knows exactly how to sing J-POP and this song suits her really well;  as this illustrates the bright tone this show is going to have. Other than that this wasn’t out of the normal for her and the band’s style, but nonetheless it was good for the sake of Sodate-kata.

Love the artwork here and it portrays nicely the outside life of the dojin circle really well.  Like the song as well, it’s generic but has a simple melody for J-POP and vocalist Miku Sawai doesn’t force it out like some other singers we’ve had this Winter season.