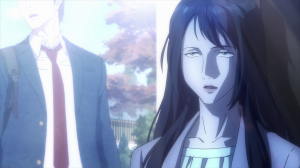 This is a great addition in its second half with all the other unique series that began last week!  Yuri Kuma Arashi, Rolling Girls, Durarara!!x2 Shou, Garo and Death Parade.  It’s nice to have a solid horror series remain for more than 1-cour and with an incredible soundtrack!

Kiseijū is back!  What a fantastic episode to start the new year considering how rushed the previous one had been:  I would say this is a strong contender for anime of the year.  This episode focuses on so many obstacles around Shinichi where he is stuck at the center of it all and this works out really well.  Probably not so much for Shinichi but the viewer anyway.

Tamiya Ryoko returns at the forefront as the subjective antagonist from earlier on and we see that in her efforts of keeping Shinichi alive against the parasite group with Goto in search of food supply restaurants.  I really like how this correlates to her rather tenacious idea of survival–  she keeps herself concealed well.  The gang that arrives to beat Shinichi up, the detective,  she gives them all different names and this act proves on her desire to co-exist with humans.  What also points this out is that raising the baby by a human shows a slight level of compassion and an even deeper understanding of Shinichi’s passionate spirit of killing parasites that kill humans.  It’s even this idea that the humans in this series are all quite defenseless putting aside that some of them might have landed some smart tactics:  Yuuko against Shimada in one of the earlier episodes.

Ryoko’s odd behavior was emphasized quite a bit here where she grabs her baby by the head and tells it to shut up:  this really pans out to how both these species can evolve.  We get a glimpse of this theme way back around the time Shinichi’s mother was turned into a parasite and now its being used as a method of understanding one another.  I can definitely see Kana’s death influencing this reversal in the characters here and fantastic introduction to the second half of Kiseijū.  Kana disregarding the warnings from the warnings from Shinichi falls victim of a parasite attack and this probably hits Murano the most here.  Affecting her relationship with Shinichi we gradually see this dynamic change quite a bit–  especially with Shinichi suggesting he should tell Murano about Migi.

Finally we are getting to the point where Shinichi is slowly coming to terms with the fact he isn’t normal and he would be ruining his own life if talk of his co-existence with a parasite got out.  Love the part where he runs RIGHT past Murano to avoid being followed by the detective as this depicts his survival instinct playing favor over his emotions.  This bridge between Shinichi and Migi is explored to great lengths here–  the detective gets a picture of Shinichi with his hand morphing as Migi.  Unleashing a survival-mode in Migi that almost shows the old Shinichi as the detective is running for his life!  His heart tainted with small parts of Migi ultimately sums up exactly how Shinichi has been evolving and now its affecting not just his personal life but the lives of others around him even on an emotional level.

Murano is expressing the idea that he IS different and things have changed.  Especially between them, Kana’s death plays a huge role in the sadness they should be sharing together but Shinichi isn’t showing it.  It’s this division between whether Shinichi is a human or a parasite that invokes a great fearful challenge within himself.  The question that raises up in this episode:  does he abandon everything he loves for the truth or continue on living with all the secrets to protect their lives.  How he should handle the other parasites and his meeting with Kana which we see here he has regrets about puts a very strong emphasis on this!

Keeping all this in mind about the depth of his character and Migi’s as well provides a strong emotional cliffhanger in the subtle romance of this show between Shinichi and Murano.  Also one thing I’ve enjoyed a lot is this aggressive relationship Migi has with his host:  while their main reason is staying alive but the ways that come to that they arrive at that conclusion are vastly different.  This provides really strong dialogue between seiyuu Aya Hirano [Migi] and Nobunaga Shimazaki [Shinichi].