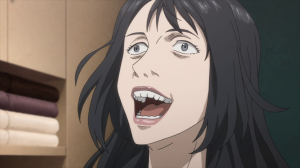 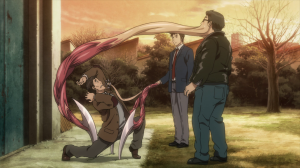 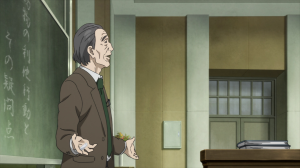 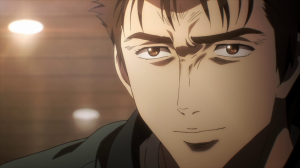 I am going to try for the remaining Kiseijū episodes to get these posts out quicker.  Still need to catch up on Garo, Sailor Moon and Noitamina’s 2-cour run of Shigatsu wa Kimi no Uso.  I’ve pre-ordered the original song and soundtrack 2-cd set so I cannot wait to hear the incredible music from that series! Now onto Kiseijū!

The breaking point for Shinichi and Ryoko finally comes ahead here!  The detective provides more than enough hassle for Migi’s way of thinking.  If I recall in my last post I mentioned there is the dynamic between Migi and Shinichi that’s aggressive.  This episode not only depicts this a great deal but illustrates even Migi’s evolution slightly–  keeping the detective alive emphasizes this greatly.  Shinichi uses this to his advantage quite well by brining back Uda to help them get more information on whose been keeping tabs on him.  The creators handle this nicely.  Use another parasite to investigate the human investigating you.  Smart.

The gradual build-up was so smooth towards Shinichi and the detective’s encounter–  the detective’s wife heeding warnings that he shouldn’t stick his nose into things that might be larger than his simple life.  What a reflection into the overall image that Kiseijū as a whole explores from the very beginning:  a horrifying alien species trying overcome a planet inhabited by humans!  This is where the mayor will come into play in future episodes greatly!

Contrasting this extremely well had to be the scene where Ryoko arrives back at her apartment to laugh at the helpless detective discovering the truth but unable to do a single thing about it!  This also illustrates the later scene where she’s carrying the baby like a paper sack and the college students are bewildered by anyone holding a baby like that.  Her parasite nature is in full view but this episode really shows off her evolution in having a shred of humanity.

Shinichi on the other hand is on the polar opposite here:  having said goodbye to Murano for two reasons.  One being the human side of him in protecting her from harm and two being the fact that he can’t tell her the truth for the sake of his own survival.  His deceased mother plays a huge role in this really well.  It’s hard for series to pull this off right, sometimes characters are killed off for shock factor that do leave some scars but in Kiseijū‘s case it enhances Shinichi as a human and what he’s been missing all this time both in terms of family and what should be inside his heart.

The gaping hole represents his fractured relationship with Murano now, his father’s lifeless emotions and now his unrequited feelings of rage towards himself for killing the very woman that protected him when he was child and couldn’t do so now that he’s become a man.

What a spectacular episode but I have to say the direction here was slightly amiss in a few scenes.  The abrupt camera cut from Ryoko’s sudden call to Shinichi and the transition into the university.  It was strangely short.  However regarding the story, this was another awesome episode of Kiseijū and I cannot wait to see next week’s!

I’m surprised there isn’t another opening and ending to this second half.  It’s been a while since we’ve had a series aside from Space Dandy that was 2-cour that uses this traditional method of anime seasons.