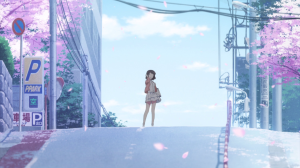 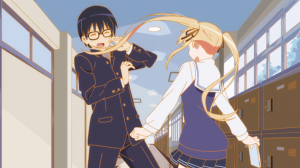 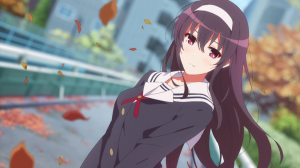 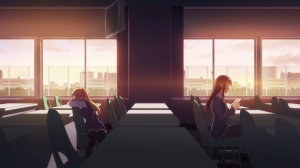 Yes!  Finally the real introduction to these girls takes fruition here at the school!  It’s good to see that they already know each other too.  This will make for a clever comedy series.  I’m glad the creators chose to give us an episode last week that jumped right into what this series is about as I felt with how slow-paced and dialogue-heavy this one was it would have turned off a ton of viewers.  Now that we have a slight idea of what each girl’s personality is, I find that the school-setting works out extremely well here.

Saenai reminds me a lot of what Bakemonogatari had been when it first began–  various girls following a very popular collection of anime behavioral tropes.  Tsundere and tease tropes with Eriri Spencer most especially when she grabs the Limited Edition Amber Concerto from her locker and Tomoya reveals her true nature.  A secret agreement between the girls that if it got out at school Tomoya would be a dead man.  Her obsession and eroge artist skills pushes forward  a really strong setup towards Tomoya’s dream of developing a Visual romance game.  The chemistry between these two finally makes sense after seeing this episode, as the previous one slightly jumped into it with each other girls.  Oh that is great where she slaps Tomoya with her pony tails, the animation there was slightly different almost as if it might have been intentional.

He is actually living out his light novel aspirations and the funny part about this is that he doesn’t even know it–  his friend points out how hot Spencer is and Tomoya only thinks of 2D girls.  This is an anime we’re talking about here and it would be great to see this dynamic shift towards a realistic one where he realizes he’s actually in a visual novel.

Moving forward with this episode he attempts recruiting tsundere type girl, Utaha Kasumigaoka.  She’s calm in her wit-minded jabs at Tomoya’s writing skills and this strongly echo’s her secretive background as popular high-school romance author really well.  The dialogue in this is fantastic and Tomoya having  a freak out moment where Utaha crumbles up his script makes me realize how solid the direction for this episode is even with the animation.

The backgrounds are gorgeous and it’s not surprise coming from one of the top studios in the business right now–  A-1 Pictures.  They do at least three series a season and this one alongside Noitamina’s other works Shigatsu wa Kimi no Uso proves the level of talent they have in these animators.  One thing I can tell is how much this is trying to cater to being an example of SHAFT’s productions.  The closeup shots of walking and slight fan service angles illustrates this greatly!  The ending was nice here–  we get a chance to see the girl that progresses him forward into making a VN (visual novel) and it ends up being an average student and classmate.  Can’t wait to see the interactions with the other girls.

The opening was more revised here featuring less scenes of the bath segment from Episode 0 and with a more toned down look at school-life.