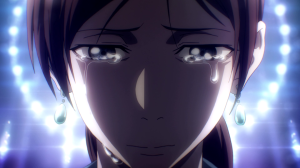 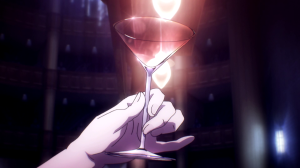 This opening is really catchy!

I am on the fence with this episode.  Death Parade is a fantastic concept and with this episode it has removed any preconceived notions I had about it being in the same vein as Mushishi—  episodic.

I love the idea that is put together here:  an arbiter that receives the memories of the two people that show up from the elevator pans out some intriguing material from what we had the previous episode.  This was also a great way to introduce the leader figure of Queen Decim, Nona.  Given how well she knows everything about this place and around it:  the train scene, it’s great to see what this show looks like outside of the bar but raises a ton of questions regarding Nona.  How long has she been here between life and death and what exactly is that house she’s seen in reading that book?  I like her tenacity in how she keeps order around Queen Decim–  the waiters on the train amplify this so much more.  Which raises yet another question.  What are the other levels within this place like?  Clavis, the elevator attendant provides the social structure this Death system will be and Quin sending Decim the memories of Takashi and Machiko to him explores this further.

Nona contrasts Decim’s solemn behavior really well.  Never would I have thought Decim screwed up in where they should end up:  raising the tensions between Machiko and Takashi also plays out how Nona is somewhat bothered by Onna’s intuition.  I can see Decim and Onna being a great pairing here and in one single episode she was able to shift quickly from the newcomer to an influential motif in this dark narrative that could collapse the entire system.  Onna understand love and looks like Decim has no clue provides some comical moments.  This is also why Onna being portrayed as the viewer here plays off strongly in understanding how these games will pan out in the future.

Decim’s pastime of crafting mannequins is creepy and has me wondering just what he did before being an arbiter–  its these small details that can flesh out each character so well.

This is one of the more compelling episodes because it places the timeframe around the same as the first episode with Machiko and Takashi.  I like it when anime shows do this, it escapes from the normalcy of most anime plots.  Garo had a few episodes like this last year.  I can clearly see why the director wanted to have an episode like this:  Machiko and Takashi both newlyweds each held onto secrets and how they acted in the previous episode might have been confusing to the viewer.  However, Nona did not need to explain everything out so black and white.  This is what I was afraid of.  Yuzuru Tachikawa the creator and director of this series should have removed this from the entire episode:  where did Machiko and Takashi both end up?  The void or reincarnation?  Reusing scenes is alright when you want to establish the same timeline and I thought it was neat that Nona and Onna were standing in the background for most of the newly wed’s dart game.  But, reshowing those flashback scenes alongside Machiko’s incredible acting ended up too forced for seeing it a second time.  It should have been left up to the viewer’s imagination here and I hope this doesn’t really bode well for me for future episodes.  I hope the don’t pull this stunt on the episode following the third one.

Want to point out that the ending here features some oddly-made mannequins breaking in slow motion.  I really like how it depicts the dark tone of this series.  It’s directed by Shinichiro Watanabe, the same guy who did last year’s Space Dandy and Zankyou no Terror!  I’m sure the next ending will be different considering we’ve got two new people showing up to play bowling.