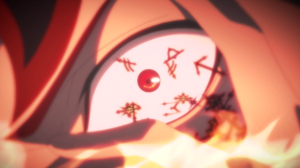 Daisuke Namikawa [Leon’s seiyu]  was a tad bit over-acted here but nonetheless this was awesome.  One of the best ending arcs to the Fall 2014 season we’ve had and I am ecstatic that there is more of this already!

Leon Luis, the real hero of the series is trying to find his own purpose beyond the duty of vanquishing Horrors.  Alfonso may have his kingdom but this was some reversal here!  Mendoza manipulating Leon into seeing his mother crying out to be saved through the flames around his Garo was indeed a powerful blow that will forever shake his soul.  I like how difficult a state German was in. This was no easy take defeating Bernardo and it not only affected him emotional but physically as well.  Is this foreshadow that he might meet his demise sometime in the future?

The words that German has been warning of Leon to be wary of his duty as a knight speaks volumes to how naive Leon has been all this time.  Engulfed by the flames, unable to hear his father or any sensible reason as to how to be a dutiful Knight he becomes lost.  It’s here where Alfonso’s fight switches things a bit:  use a Makai knight to carry out Mendoza’s plans.  The town in flames depicts the burning rage Leon’s carried all these years and instead of a Horror corrupting him its his own doing thus the fight against prince and sorrowful Makai Knight caught up with the past about his mother begins.

German apologizing to Anna was insurmountable proof that Leon has become unfit as a Makai Knight and I like how Alfonso is disgusted by his cousin’s failure to uphold peace.  So what does he do here?  Takes the Garo for himself and kills the Horror that Mendoza made!  This was the best animated episode we’ve had yet of this show so far and I look forward to see what comes next!  I think the most surprising part of this had to be Mendoza being eaten by the Horror– the very creatures he used as pawns throughout this first half for his own selfish gains kills him!

Epilogues.  This was a good time to put this in here.  Creator Amemiya could have ended this after the battle but used Alfonso’s death as fuel to give more destiny into Alfonso’s claim to Valiante.  Leon however caught up with no reason to live wanders towards a cliff to kill himself.  What a way to develop a main character and completely dismantle him!  Incredible!  The crows flying away look to illustrate that his mother’s death was finally leaving him and he’s been set free.

I knew we would see that village woman again from episode 8!  I’m sure we will see more of her in the upcoming episodes!