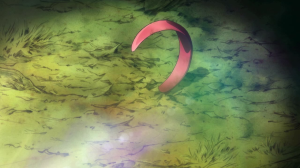 Heavy symbolism.  Kunihiko Ikuhara is well known in the industry for this style.  I absolutely love it especially since he’s combined one of the best series of the 90’s and one the wildest of the last decade into a story about bears.  It’s a bear eat bear world out there and I find that the yuri in this show has a strong tie into who is a bear or not.  Mistuko Yurizono the role model of all the girls at the academy is a bear and her aggressive behavior wasn’t understated here one bit!  She has this lust over Kureha and this plays out nicely for Ginko and Lulu’s shift away from villains into saviors.  Even the teacher has an understanding of the situation:  she’s compiled a picture of the missing girls into that library cabinet we’ve seen a few times throughout.  I can definitely foresee her being a bear as well considering how every girl in this series that turns out to be a bear has “yuri” in their name.  The class decides to partake in the invisible storm–  band together as one and eradicate evil.  As unexplained as this motif was I wasn’t really sure how this term was being thrown around but with this episode I can see this playing out numerous ways.

The invisible storm represents both sides–  the girls at the academy want to be cleansed away from evil with their love in full bloom.  We see that here with Eriko Oniyama.  She’s manipulated by Mitsuko’s slight charm into temptation.  I like how this eventually led up to singling out Kureha as evil towards the other girls so that Mitsuko can have her all to herself.  On the other hand, the bears in this case want to make these girls invisible by indulging in the here and now with their literal hunger and figuratively speaking sexual hunger to feast on the lilies of these girls.

I can see a lot of Utena‘s influence here with the girls creating this dynamic around the school and what it says about the classmates.  Good to see we’ve had these girls’ introductions via tag lines.  I like how this older school setting is much more modernized here–  how much social media plays a part of this.  Fantastic visuals during that scene!

I’m glad that Sumika wasn’t tossed aside after the first episode–  even though she’s dead or missing she still plays a vital role in Kureha’s own invisible storm.  The flashback where Kureha arrives during an actual storm [this was really funny to me for some reason] to save the flowerbed her mother cherished and sees Sumika establishes a ton of information.  Kureha is gradually understanding her own desires and it’s that very scene with Sumika that establishes this never back down on love theme that’s been playing throughout.  Mistuko’s frightening act of Sumika depicts this as well–  which results in Kureha shooting her.  To think that this would be the third time we would see the Court of Severance in the exact same manner that we did previously however I like how Ginko and Lulu’s resolves have changed–  they will eat humans for the sake of saving Kureha.  I like how these two bear girls didn’t end up saving Kureha literally but gave her the Lily Approved strength that she needed to deliver a shot on Mitsuko.  Finally the realization of a bear in human form comes to fruition here and it turns out beautifully here!

The techno beat version of Ave Maria was a nice touch at the end.  Yukari Hashimoto is impressing me more and more with this amazing soundtrack!  Including the sound effects are top notch: the walking, the gun firing, even the down to the clock by the school ticking. It’s so strong in Yuri Kuma!  I like this style though,  heavy on the metaphors with its sound and it’s no big surprise since its done by Tomokazu Mitsui of Mawaru Penguindrum‘s sound editing as well!