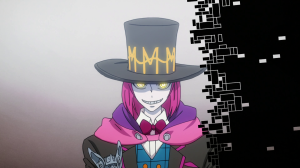 Genki Jason picked this series out for me as part of my second half for the challenge and so here is the first episode’s review.

Ayakashi’s Bakeneko Arc, Mononoke—  two of my favorite Noitamina series by director Kenji Nakamura returns with a cyberpunk mysterious anime series that dives into economic issues backed by a very creative idea.  People wager their lives in order to put themselves as well as others on the map for financial success.  Kenji Nakamura is a skilled director and writer–  he’s pretty much the best of the best aside from Shinichiro Watanabe when it comes to a Noitamina series.  Really good at short stories and I hope that this 1-cour series can maintain the level of interest it did for me with this first episode and his previous works.

Noitamina.  I like this late-night network a ton because they can churn out some very original material.  2011 was a sort of mixed bag for them–  Hōrō Musuko handles an extremely artistic perspective of children who want to be of the opposite sex, while Fractale was an ambitious Chibli-style sci-fi 1-cour series set in a fictional Ireland about virtual reality and how it stabilizes and gives happiness to people.  It’s too bad the last three episodes were rushed as much as they were–  we could’ve had an awesome series there.  We also had one of the greatest emotional series that tackles childhood death really well airing alongside [C]–  Ano Hi Mita Hana no Namae o Bokutachi wa Mada Shiranai.

The summer season of 2011 gave us No. 6–  a decent dystopian sci-fi drama about social classes and what separate them from common people and Usagi Drop.  This had to be one of my favorite Josei series that features adults in recent years.

Where Noitamina failed was with Guilty Crown—  a series with tons of promise with its staff and was really visually appealing but fell flat.  It shoved its main character Shu Ouma front and center and made him more important than the plot itself.  Un-Go was fantastic–  a detective occult series about Shinjuurou Yuki and his partner, Inga exposing people’s souls in search of the truth.  We had a ton of original series that year and I’m glad that Genki Jason recommended this series to me.  It’s fascinating!

I’m reminded a lot of what Higashi no Eden had set forth with [C]’s premiere episode here–  currency is the focal point at developing these characters, how the story progresses and the originality of it all.

I like a lot how this episode doesn’t start off with Kimimaro acquiring the Midas card rather it uses a complete stranger to provide the viewer with the Financial District, how it operates from the real world and what the risks and consequences can be.  Nice build-up.  It’s cool we switch perspectives from the man killing himself by jumping onto the train tracks–  the same train Kimimaro is on.  There isn’t a lot of explanation to the viewer rather it uses a conventional style of animation to get the message this first episode wanted to achieve in getting across well.  Money is the sole source of what can change a person’s life within a single day.

What’s even better is that when Kimimaro is introduced we see him living a very normal lifee.  He came across as really boring to me–  there wasn’t a spontaneous side to him; just a casual uncaring demeanor.  Works two jobs, goes to college and its this theme of temptation that gradually pulls him in.  This allows for him to evolve and be really intriguing later on.

Hanabi becoming a love interest for Kimimaro is dismantled from the get-go–  she’s got a boyfriend whose got a ton of money.  What an incredible way to build up this mysterious financial district for Kimimaro by depicting his desires skillfully.

His dreams play on this quite a lot–  he’s stressed he doesn’t have money and the things that he wants ends up being a nice interlude to normalcy from completely crazy.  Masakaki (voiced by Takahiro Sakurai) was the perfect character to use to lure him into his temptations and offer him a chance to wager his current life for a future that could be more promising.

I also like how the animation used a pixelated-like style with the on-screen text with conversations between Masakaki and Kimimaro.  Really clever.  Even though there were some distorted faces here I hope that only having 1-cour they can clean this up as the series goes along.  The background designs are nice however the CG on the taxi stuck out like a sore thumb.  Hopefully this will be fixed.

The supernatural battle between the two people at the beginning were really different than what I’d imagined going into this.  I’m interested in seeing how the next episode will be.  Should I pick this up?  Hmmm…

The rock music goes nicely with the pushing perspective of currency this opening sequence illustrates to the viewer.  I love this animation, its really unique and the designs of the bills were animated with tons of detail!  The visuals moving inwards through the various currency showing troops, etc was a really cool touch.

One of my favorite Japanese bands simply because I love Yumi Uchimura’s voice.  She’s spectacular and I like how spastic this animation is–  especially with the vast colors the creators used here!  A bunch of blocks with various colors and lines moving in quick motions was a really neat way to depict how someone travels from the real world to the financial district!  Awesome!