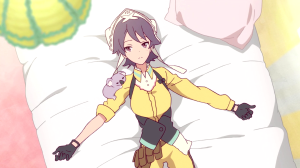 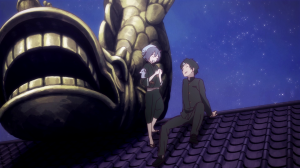 I really hope this show can continue this trend–  traveling to different towns with different clans and perspectives about life.  What would this show be without its daring ability to pull the viewer in by creating unique characteristics for each clan?  The fact that Mie Motors members cannot be heard without the sound of their engines roaring, haha.  What a crazy trait to use for this group–  nonetheless this is hilarious and works out extremely well for this episode!

The shachihoko was a great chance to bring these girls into the town– it was the aftermath of Mie Motors causing trouble that would ultimately bring these four to Himeko’s story and her abilities with a Moonlight Stone.  I also like how much it reconnects with the first episode of this series–  Nozomi recalls Himeko crafting Maccha Green’s stone in a heart shape.  I like how magical it looks through the eyes of a child Nozomi.  Everything was a mystery and struck her with curiosity and it’s this motif that handles Himeko’s grandfather wanting her to rebuild the shachihoko nicely.

However, the transition was strange here–  it wasn’t bad it felt abrupt. One thing is how this episode in its second half slightly moved away from Nozomi’s past into Dandy’s explanation of the Twin Towers Declaration and Mie Motor’s reckless behavior.  Genius to bring this terminology back into the story here, however I felt this would have been better if it was placed more towards the beginning.

With comparison to the previous two episodes–  using a japanese anime series to gradually develop its character’s motives we get to see Mr. Dandy the bartender protect the Rests at the cafe.  It’s a shame this episode couldn’t have gone with a cross over here–  by using Space Dandy to portray the bartender.  After watching this I feel a reoccurring theme that’s being used throughout the episodic arc characters–  bonding together and moving away from the established clans that were created long ago to develop real long lasting friendships just as these Ai, Nozomi, Chiaya, and Yukina are doing.

I noticed this in the previous episode with Aki stepping down from her Best title of ThunderRoad and now I’m seeing a relationship has formed between Mie Motor’s captain Tomoki Suzuka and Himeko.  It will be their relationship that will provide a hopefully good conclusion to this shachihoko arc.

Come to think of it both Masami Utoku [Maccha Green] and Kuniko Shigyou [Higashi Murayama leader] lost their stones after the battle caused destruction which ended their story as well.

Four girls in search of stones ends another Bests’ stories and begins a new journey for them.  What a powerful narrative to carry over between episodes!  Speaks volumes to children that watch this even with this episode–  when you find something you are good at and like doing hold on to with all your heart.  Morals are being taught with each episode–  I really like how Himeko’s family for generations had made the shachihoko and it’s her incredible artisan skills that channels this for kids so strongly!

Ai’s in intriguing girl so far–  she had taken an interest an Chiaya’s stone and now she questions Dandy outright if he has stone because he could defend against a motorcycle.  I hope we can see great things from this girl in future episodes–  will she finally gain her strength and become a Best?