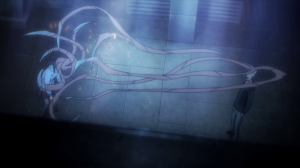 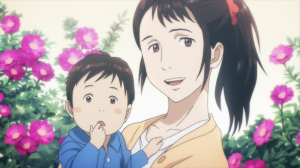 The episode just proves how different Tamura Reiko is from the rest of the parasite group she’s been working with.  From the get-go I’ve really enjoyed her character a lot–  she’s brilliant and has this composure and curiosity to learn more about the species she’s been killing.  I like how the baby is the integral piece in her transformative process from parasite to human and we get to see the results of that here to great lengths!

The fight that starts this episode off was incredibly well-drawn animated sequences with such fluidness!  This was probably one of the best first-halves to a Kiseijū yet and I enjoyed that scene where she’s running through the city with half a head–  the couple frightened by her appearance and still mesmerized by what they had just witnessed only to bring back the humor of what makes this series so great!  Reiko splitting her head apart was very funny!  The reactions of the couple brought this series back in full swing–  classic horror!

Shinichi feels like a minor character here.  Tamura Reiko is put into the spotlight after that intense cliffhanger from last time!  Three parasites don’t agree with her motives of leaving Shinichi alone and find her to be a dangerous parasite that’s evolving with more human components than anyone ever could have imagined!

I really like this episode a lot.  This not only provides a a strong buildup for Shinichi and how he’s going to live his life after all this is over but it also bridges the gap between human and parasites right into plain view here–  the relationship between Reiko and her baby.  What does that mean to her feeling like an outsider looking in–  developing human emotions towards a living thing that she gave birth to.

I’m sure next episode will be a nice closure for her and Shinichi coping with his own mother’s death–  we can clearly see that when Reiko arrives at Shinichi’s house and takes an interest in all the pictures he has with his mother.

I’m fascinated by the fact that this show chooses to not neglect it’s minor human cast–  The detective’s death here pushes the original investigator on Shinichi’s family case to expose the parasites for what they are.  What’s even more is how well the creators put Murano back into the picture by using her as the piece of the puzzle that brings Shinichi and Reiko together–  love that scene where she shows up at Shinichi’s house to find Reiko there.  Good thing she didn’t get killed there and I would venture to guess that if she hadn’t had the baby and learned of the turmoil Shinichi went through with losing his mother things would have gone much differently here.  She would have killed Murano on the spot.