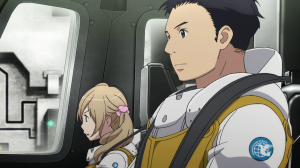 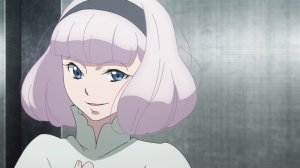 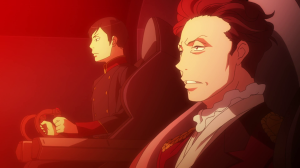 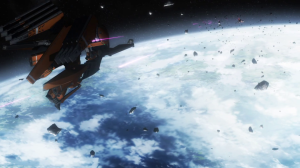 Now this is a series I haven’t talked about since the premiere in January.  While Rolling Girls is an absolute blast for the whole family, Kiseiju‘s second half is a perfect example of a body-horror show, Yuri Kuma Arashi is thought provoking and involves more than just one watch.  Death Parade provides us with an original concept around a theme of human relationships and each episode is varied.  Aldnoah.Zero is a prime example of an entertaining series.

Initially I didn’t like the fact that Inaho and even Asseylum are somewhat alive in this second half, however, it’s this episode that reminded me why I enjoyed the first half’s beginning episodes so much–  politics, social status and a giant war between humans of the same race but born from different places.  I like how the Vers are portrayed as nobility especially with their costume designs.

I just recently purchased a 4K television and I must admit that anime looks really good on it  Especially action-packed series like this one.

There are a few details even with this episode that I’ve noticed that separates a Gen Urobuchi as a writer and what he aims to get across to the viewer than any other writer of the past decade.  The quickly zoomed in drawn scenes that create drama, the use of quotes through the various Counts in this series and how important it is to create sound effects that establish the plot more intensely.  I recently

While Aldnoah may forget at times how to follow through with its twists and turns it does know how to develop its characters well.  Inaho has gained a new eye after losing his while defending the Princess–   changes his character completely here.  He’s a lot more intellectual than before and I can’t see him living by the end of this war.

This episode was a lot better than the previous one and this is because we are re-introduced to Inko and her flattery with Inaho–  that scene was quite funny with the weight.  I like how this is a slow and steady tie-in to him realizing the video feed from the Princess Asseylum–  in fact I like this new Princess a lot.  She wants to be noticed and I given her scene with Asseylum left in the tube I can clearly see her becoming an antagonist to Slaine in future episodes.

Saaazbaum.  Poor guy should have been killed when Slaine witnessed him shooting Asseylum however, this is one way to do it.  Keeping him alive long enough in order for Slaine to achieve social status within Vers–  I get this feeling with his conversation with Lemrina and his loyalty to her.  He’s come along way from the boy who was shaken up by killing Trillram and now we see him getting knighted by Lemrina.  I can this be the stepping stone for him achieving his goals and becoming a more well-rounded main character later on.

The inevitable encounter between Slaine and Inaho was a nice touch here–  battling out between geniuses amidst an asteroid cluster in space.  Fantastic battle that leaves a strong mark in the second half of this episode.