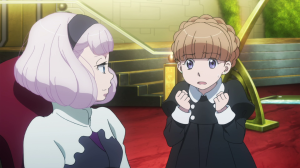 That was jaw-dropping.  What an amazing episode here!  After that awesome fight it’s only normal that we would have a calm beginning to this one.  The chess game between Inaho and Darzana nicely added that Inaho is a pivotal member of their crew–  good use of the Asseylum flashback and how Inaho feels about losing her.  I’m glad the creators didn’t over play this scene here–  this makes these characters come across more realistic.  Harklight and Slaine have an intriguing relationship and I’m wondering myself if he’s a Terran as well–  he’s involved too conveniently not to be.

Nice contrast when they arrive back from battle–  the Counts being upset over his influence towards Vers soldiers.  Saazbaum fuels this perfectly by making Slaine his son and it gives a new found strength that Slaine can use for his own gains.  As great a twist this is it provides a huge death flag for Saazbaum that in this second half finally reveals Slaine’s unwavering loyalty towards Princess Asseylum and what happened back at Landing Castle.

The first half of Aldnoah was all about Vers invading Earth while this second half is all about Terrans taking back their rights in order to survive and protect their homeland.  Slaine is the key to this series–  he’s finally taking revenge on Saazbaum, gaining loyalty within Vers and at last becoming a Count in the wake of his newly appointed Father Saazbaum’s death.

Did anyone else notice the angle-shot scene of Slaine’s foot with some sort of metallic tape on the bottom of his shoe?  Is this intentional to depict he’s showing his faith towards his own Terran-kind by working with Inaho and the others?