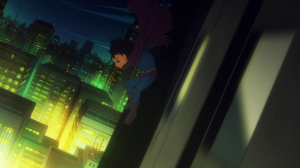 Noitamina sure has picked a very beautiful series to run alongside comedy visual novel series Saenai.  The amount of imagery it uses to channel out even the minor characters of this series is animated so well!  I say this because that opening sequence was incredibly awesome–  Takeshi’s childhood is turned upside and paved the way in becoming a musician because of Kousei’s talent.  That beginning scene reminds me a lot of those ‘hero’ sections throughout Ping Pong The Animation last year–  funny how there is a parallel between a music romance series and a sports series with its two main characters being portrayed as programmed without emotions.  Strong correlation between the two of them!  Kousei is seen as unaffected by the emotional state of others while he’s playing music whereas Tsukimoto is viewed by others as automatic when he’s playing a match of pong.

I like how this show reflects even the slightest moments these musicians have that make an impact later on.  After Kousei’s profound performance Takeshi realizes he’s on a different level than him–  one that isn’t close to what he’s wanted to achieve all this time.  I like how there is a shift between what has changed in Kousei to bringing in his mentor Seto Hiroko–  she’s funny and is the only other person that has had a solid relationship with Kousei’s mother.  Really enjoy these flashback scenes because we are gradually seeing that his mother isn’t all that bad.

The interactions with Ryouta, Tsubaki and Kaori were fantastic–  just another point as to how this show can work when it uses middle schoolers at its core.  I think another part of this that follow this trend is Kousei’s dissatisfaction with the grown up judges that find his playing distasteful.  He’s a youth trying to find himself and we finally get to see him  here express his emotions just like Ryouta did crying in the bathroom stall and Tsubaki crying on Kousei’s back.  Now only time will tell when Kaori will break down after coming to the adult realization that she’s ill.  Speaking of this I think its interesting that Kousei passes out just like Kaori had done previously–  wonderful depiction of how much these two are alike even without music.

The soundtrack by Masaru Yokoyama is an emotional ride just like this series has been–  a complete divergence from his other work this season Rolling Girls!  The firefly scene with Kaori and Kousei here is a nice breakaway from all those music performances and sets the stage for these two to evolve their friendship into romance.  Fantastic turnaround that even illustrates how much Kousei is growing up and going on a journey with love filling his heart.  Her Charlie Brown quote is a large indication that she probably won’t be alive at the end of this series and this was a strong end to its first half!  I’m going to miss that opening animation with GOOSEHOUSE’s Hikaru Nara song!