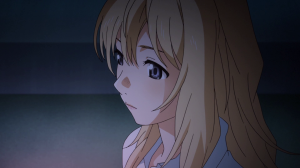 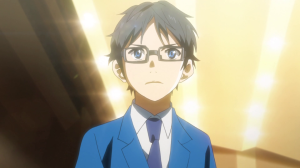 Tsubaki is interested in Kousei and always has been–  I’m glad this show isn’t shoving it down our throats here especially with that subtle opening scene leading into Kousei and Kaori practicing for the Gala concert.  The are young kids all trying to comprehend their feelings even their own and I like how this series doesn’t forget that.

The song that’s chosen, Love’s Sorrow illustrates these Kaori and Kousei quite well.  Kaori sees the Love’s Joy piece and shifts her gaze onto Love’s Sorrow because of the inevitable illness that is someday going to take away the music she enjoys so much.  Whether she knows it or not she’s helping Kousei immensely here by picking this piece.

A passionately dark composition that represents the numerous punishments and trials Kousei suffered as a child especially with the relationship he had with Saki his mother.  Kaori is the light that will pull Kousei out of the darkness or in this case far away from not hearing the notes, sticking to the score but instead finding a sound all for himself.

This is a great start to the second half because we’ve got all these characters lined up for potential–  Hiroko is the parental direction he needs right now in order to say goodbye to his mother.  Kaori is so spunky I can see where she gets it–  the parents are just as lively and working at a pastry shop eludes the entire nature of her family in a matter of minutes!  That lively energy is just what the group of friends needs–  dramatic turnaround to have him falling in the pool and trace back memories of his mother Saki all the while trying to find a sound that means something to him.  A realistic scene of youth that moves towards an impending future for Kaori when she doesn’t show up.

Kousei is more determined than ever before because that look he gives at the very end just shows he’s finally found that something or rather someone to play out to. 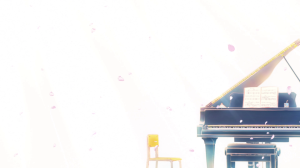 This is a peaceful song with beautiful visuals that cross over between the time they had as kids to present time.  The feathers flowing around illustrates a sense of setting here:  it’s spring and music is going to change their friendships forever.  This is the first major debut for Coala Mode and the singer doesn’t stretch to far with her voice which is refreshing to hear. 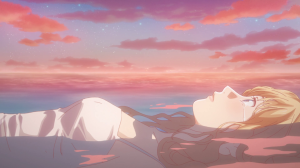 Love the visuals here–  really well drawn to see Kaori laying in the ocean as the setting changes!  Her crying depicts she’s struggling with her illness and there may be no escape from it.  The song is a bit too generic with the overlay of the strings and the drums but Nanae’s voice works really well at getting a dramatic effect across here to illustrate Kaori’s state of mind.