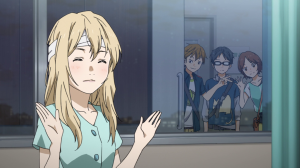 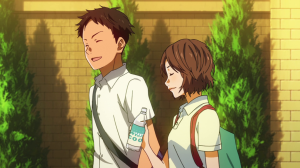 Kyohei Ishiguro isn’t a fantastic director but I feel like with this series he’s surrounded himself with talented people that know how to tell an emotionally invoking story week after week!  It also helps that he’s adapting rather than taking the helm on an original production–  the main character[s] develop further only to change the story without any concrete substance to back up a strong setting is one problem that could have come from an original work by Ishiguro.  He’s doing a fantastic job with this series alongside it being a Noitamina broadcast that will no doubt help him become a better director.

After that cliffhanger–  I’m glad this series hasn’t left Kaori out of the picture just yet.  In order for Kousei to get past his mother’s death he channels his emotions through performing music.  Kaori is still as spirited as ever after passing out and winding up in the hospital and Kousei worrying just proves he admires her as a musician and a friend on a deeper level than the other cast.

The animation helps get this comedy to pull off quite nicely–  kawaii illustrations and sometimes out of the norm facial expressions of Kaori and the others is a smart direction to take from the inevitable dark emotional ride Shigatsu will take us through for the first time but for Kousei a similar situation he knows all too well with Kaori.

While we’ve had our attention onto the musician performances these past episodes and what Kousei has had to get through to find his own style it is refreshing to see more of how Tsubaki is feeling towards Kousei.   She’s having dates with Saito but its clear that she’s conflicted and this episode didn’t take any time elaborating on this more than the previous ones about her did.  It’s almost like this episode is recapping what we already known however in a different light.  She’s enamored by a boy that’s transformed into a young man after having ignored him for so long.  Seeing that he’s matured after that performance last time and how she looks at him differently now is a struggle all its own for her becoming more of a grown-up.  I felt this episode really conveyed this well through her scene changes at the festival, cafe and school appearance throughout.

What makes this a triumphant episode for Tsubaki is how her own feelings in how she cares about him more than a friend for far too long are vented out.  An internal resolution that she’s been struggling with inside her heart.  Those flashback scenes she recalls as she is running away from him depict the age of these kids very well–  all of them are growing up gradually and whether its music, romance or sports these kids are overcoming it in their own ways.  This adds so much more realism to this school setting and its dramatic main cast.