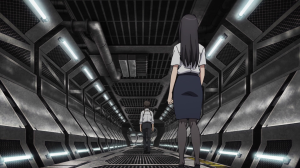 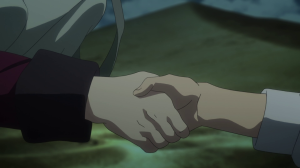 Count Mazuurek is far away from the battlefield he’s always desired to stray away from:  he’s in jail and is in the protection of Inaho.  Almost a good fit for this guy setting up a deal with Inaho to reveal the truth behind the fake Princess Asseylum.  I’m not sure who directed this episode or the previous one but whatever they are doing here is working in terms of its newly introduced characters in the second half!

Inaho developing his own cybernetic eye to push away the layers of lies this series is keeping up with at an alarming rate week after week may be all well and good for the action scenes but its how he interacts with his companions that this show falls short.  They should have left out Yagarai’s comment about ‘brain problems later on’ because this show still needs to hold some mystery without showing all its cards constantly.

Rayet steals the spotlight here–  her conversation with the girls at the cafeteria is hilarious but we’ve also got the serious turnaround about her commitment of killing Martians.  She’s determined and I like that about her however it’s scenes with Inaho here that I’ve got a problem with.  Inaho whether or not he saw this coming from before his eye is anyone’s guess but how he’s able to sense a change of heart from her is utterly boring.  It’s this sort of drama that can wreck this series–  pit a main character like Inaho at the center of all the turmoil to come out every bit of it unscathed and more logical than ever without answering any questions to the viewer.

Moreover though I want to point out that this show is still doing some things right–  Lemrina has been taking actions of her own really illustrates well how Vers is fracturing at its core.  The duel between Slaine and Count Marylcian emphasizes this as well.  I like that comment here where Marylcian mentions to Lemrina under disguise as Asseylum that she is like a bird trapped in a cage.  This really translates a strong message about Lemrina–  she’s wanting to get noticed by Slaine even more than Asseylum ever was but can’t place herself outside of the image of Asseylum that she has deceitfully created in order to hide the truth out of respect for Slaine.