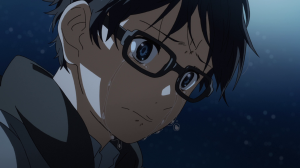 According to the official website there is going to be an OVA in the coming months–  will this be an alternate ending for Kaori?  Let’s hope so.

At last!  Tsubaki finally lets Kousei know how she feels–  it’s comical where she kicks him in the shin, after holding her love inside her heart for so long she runs away.  The angles in that scene are done incredibly well and just shows how there hasn’t been the slightest drop in animation quality yet!  Shigatsu excels at drama but one part of this I really enjoy is the aftermath of awkward situations between the main cast and minor characters–  launching the bat at her friend is priceless here!  Tsubaki is always distracted by Kousei and this series doesn’t forget that one bit!  It’s very funny how lightly thrown in this is with Kousei’s perspective about girls being enigmas.

The flashbacks are a nuisance now because we already have a pretty good idea about how their relationship has been in the past and this overly emphasizes this too much.  I am hoping that the final two episodes aren’t shattered by this effect.

However the second half is awesome because after Tsubaki takes the dive, Kousei follows suit by telling Kaori he wants to see her.  I’ve mentioned before how I really like the friendship Watari and Kousei hold but this is bitter sweet for them because Kousei reveals to him he’s got feelings for Kaori and it’s good to see Watari be so cool about all of it.  They’re best friends that understand each other–  great build up towards Kaori’s inevitable encounter with death.  This might have been the last time they see her and to see this view of her struggling in pain is heart-wrenching.

The cat that’s been seen throughout this series is hit by a car really speaks volumes to Kousei about the reality of Kaori and what he’s feeling inside his heart.  He’s lost his mom, the cat and possibly Kaori–  his emotionless eyes pushes this even farther here!

The question is how will he handle this through his music?