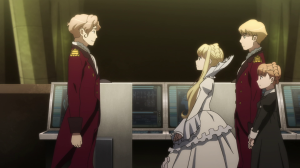 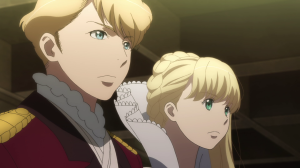 Throughout this entire series Princess Asseylum has been seen as this damsel in distress for the Terrans and the Vers.  She’s been the pivotal key to tying all these characters together and the initial start of waging this war.  She’s had feelings regarding the war but never have they been so clearly stated than right here.  She’s growing up because she has seen what life is like on Mars and on Earth and can determine in her own mind what can provide happiness between the two cultures.  Slaine’s fevered attempts at launching attack after attack in this second half gives me the impression of how lost he really is–  Eldderittuo putting a positive spin on this ultimately questions Asseylum’s trust in this war really pays a testament to Asseylum’s courage and everything that she’s been through really well.

Before I being about the Emperor I want to mention that the seiyu are different now, due to the unfortunate passing of Shinji Ogawa [ Nodame Cantabile‘s Stresemann, Black Jack‘s Kagemitsu Hazawa].  Shinji did a variety of roles.  Here we’ve got a newer yet very similar sounding seiyu with Takayuki Sugo [ BLEACH‘s Zangetsu, Heat Guy J’s android lead ‘J’]  The creators did a nice job at seamlessly pulling this off due to this tragic event of Ogawa.

Finally we get to see the Emperor and now on his death bed revealing to his granddaughter a crushing pretense on the Aldnoah drives and the meaning behind them!  Mankind’s luxurious equipment that will heed them into the future, bring happiness to their civilization and yet somehow must follow one simple principle:  never to be misused.  How ironic that the very Princess standing before the Emperor is the same person that gave the Aldnoah power to two Terrans–  Inaho and Slaine.

I think what this episode capitalizes on is the extreme twist–  Asseylum chooses Cruhteo as her husband.  Looking back at the opening sequences its hinted that either Slaine or Inaho would end up with her but here she’s standing her own ground with a question lurking in the background–  with me or against me?  Perhaps she’s understanding the sacrifices that have been made to carry on this war and realizes there will still be more if she intends to establish a peace agreement between the two.