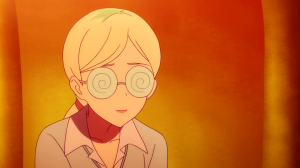 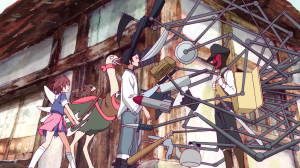 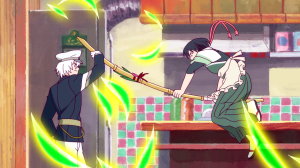 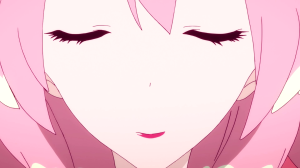 This series has a ton of potential behind it.  I can think of two series this season specifically that follow this style–  Death Parade and Rolling Girls.  Only problem is its length–  1 cour can be a huge problem for series that excel at world building.  The issue with both of these series are that the creators have unfortunately decided to run with only half a season with a straight-forward narrative to run with adding details in between maybe too many details.  For Rolling Girls it’s all about the group traveling to different districts and allowing for the home turf Bests to shine.  While those past few episodes have been highly entertaining and uniquely animated its just as a feared–  the writers have aimed at shifting this anime from highlighting the minor characters and further developing the main cast so late in the game.  Four completely different stories that haven’t had the runtime to connect yet just shows how much of a headache this will be for the final episodes.

The first half here continues what is loosely mentioned from last time about Chiaya and slams the hammer down–  she and her mother collecting the stones are aliens!  Where did THIS come from?  I like the backstory on their characters but it’s a little too late to re-introduce Chiaya and bring her into the forefront of this series.  IF and I say IF this receives a second season then it will all make sense–  however, as of right now I can’t really see any good coming from developing her with such a twist.  I do like how the moonlight stones are derived from their homeland and will end up playing a key role by the end instead of capitalizing on one big motive:  to make the animation stand out and look ‘pretty’.  At least Chiaya had a surprisingly adorable scene as an octopus close to death.  Very funny moment there!  Adding depth to her is how she wants to fix Nozomi and Ai’s relationship–  really adds some personality to this show that has been left in the shadows since the beginning.

The second portion of this story runs out of steam by using Yukina solely as a gag device–  she gets lost again and winds up in the Stone’s hideout.  Good thing this series has forgotten its comedy but sometimes characters that outshine others in this trope should be a bit more rounded.  For instance what is her family like, would have liked to see an episode dedicated to her in a district.

Ai is still intrigued by the stones and it’s good she’s pairing up with the Fujiwara family–  perhaps she will learn a thing or two from them.  I say this because its a good contrast between selfishness and honor.  This is my favorite part of the episode because Nozomi and Ai still haven’t seen each other since the big fight and seeing Haru respectfully follow the orders of the town and pay the outlandish taxes by the Okayama demons illustrates subtle foreshadow of Ai protecting others without thinking of herself first.

Nozomi is useless as ever here–  still looking for her friends, negotiating a peace between Noyotake Best Kaguya and Shima Ishizukuru’s henchmen and ultimately introducing the big theme of this arc.  The adventures are over as she’s missing her friends, her home and the reason she started this moonlight stone hunting adventure in the first place.  I will add that the fight sequence between Kaguya and Ishizukuru’s men is the highlight of this episode here!  Incredibly fluid!  Can’t wait to see that fight between Ura Kukino and Momo Fujiwara.