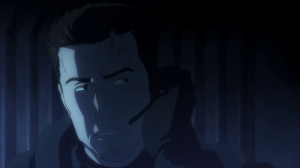 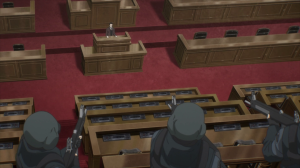 Lots of action-packed moments that is dissolving the mystery of these parasitic beings rather quickly.  I didn’t like this episode too much because it’s fighting fire with fire or in Yamagishi’s case exterminating these pests in the same fashion that they are doing to humans only out of survival.  On one hand though it is interesting to see this comparison between the two species because we are finally seeing humans standing their own ground keeping their world safe by using any means necessary.

Here’s where Uragami comes in.  He’s ruthless, has about zero compassion for others and above all else tests the naivety of the police force with his supernatural power to detect the parasites from humans.  I like how fear is used as a rolling thread in establishing Uragami’s probable escape–  he’s in the protection of one of the most worthless cops.  Un-cuffing him is definitely going to be a fatal mistake in the next episode but I like where his character is going.  It really is too bad we could’ve have seen more of Uragami in the series more shining arcs towards the beginning, but this works quite well here.  Yamagishi’s plan is too far-fetched here to even work:  we saw that with the previous episode starting to unravel with that woman being a parasite!  Going from bad to worse in a life and death scenario.  Yamagishi is the only police member here that is choosing to discard humanity for the sake of telling these monsters apart which can be good for personal development but here its very lackluster and forced.

This episode chooses to push forward without any deep narrative to back it up like the previous arcs have done–  Gotou telling the police team to follow him so he can kill them.  What?  Student Himada would have rushed in just like he was going to do to Murano’s friend uncovering his identity in the first half!  What is Gotou even thinking?!  This is where this series is falling off its tracks with this single episode.  However, I do like how the Mayor is involving himself in the conflict with that cliffhanger.

On a more personal note, I didn’t like this arc very much even in the manga.  It forcefully brushes through the story way too quickly without any developments from its side-characters or Shinichi providing the momentum to carry it along.