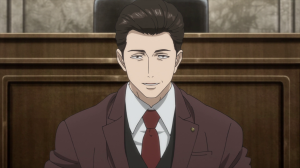 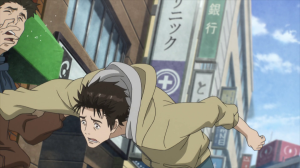 The beginning of this episode strongly points out what Kiseiju does well and what it does bad.  Something I’ve noticed in this arc even from the manga is how Mayor Hirokawa is written for the purpose of bringing a strong connection between parasites and humans in this story.  Reiko’s intentions showcased this wonderfully in previous episodes.  She held faith that Hirokawa could develop a plausible structure between species with his position in politics but what is wrong with this is how this show and even its author neglected to build the framework for this into something larger.  How about a few chapters and episodes dedicated to Hirokawa’s power within his position.  For some reason I feel this segment of the episode is underwhelming.  Although the narrative and the underlining point he’s trying to get across is strong, its the build-up to this point that falls short.  This declaration in front of the soldiers here is something that’s been touched on by Migi throughout:  “life should be protected” and is a nice way to conclude this arc and bring a somewhat solid finale to humanity’s response to the parasites invasion.  Heck, this is even shown where Yamagishi finally sees the sort of monster Gotou is and fails in taking Shinichi’s advice resulting in his downfall.

While Shinichi is still left in the sidelines here he’s still very much an integral part in creating this distinction between the two species:  they’re living out of survival and he’s living for many reasons including his father, Murano and most importantly ensuring his mom’s death isn’t in vain.  In retrospect the flashback of her protecting him from the hot pan illustrates exactly what and why he wants to protect and survive in the first place.

At first glance from seeing how this arc has panned out I was worried but with its conclusion here, I’m sure that writer Shoji Yonemura has plans to develop this finale in only three episodes without missing anything.  We’ve only got a bit of content left to go with the manga and this episode manages to even bring in the sex scene between Shinichi and Murano within good taste.  It’s a great scene that provides a good startup for the final act for Kiseiju.  This just touches on the narrative slightly–  this scene between the two not only enhances their relationship but relinquishes Shinichi’s parasitic behavior and creates this atmosphere of compassion and a will to live for him rather than just out of instinct for survival.  I guess if I had to pick something I didn’t enjoy its the music–  why couldn’t Ken Arai create a more diverse soundtrack for this series?  Nonetheless the dubstep has been a step in the right direction for modernizing a story that’s fairly older but it could have been nice to get a wider range of styles especially for this scene.

It’s also a shame that this police effort arc couldn’t have learned how to develop considering how good the second half of this episode is–  Shinichi’s fear of Gotou showing up at any time to kill him gradually builds up to him sleeping with Murano.  I love that part where he punches those guys in the face as he’s apologizing.  There’s the Shinichi from the beginning finally showing back up again but now with brute strength. Haha, great moment for him there!

I hope once this series wraps up that there is some announcement for the one-shots the various authors are writing within this world because this idea of alien beings playing host to humans has been fantastic!  A strong action-packed character study series for its main character!