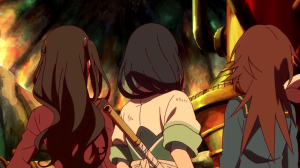 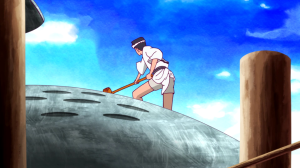 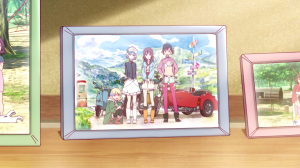 This is a prime example of a 1-cour series that stuffs too much material in it and just flies with it willy-nilly.  This episode works too hard at concluding everything.  This past week we’ve had a lot of finales considering how the new season is gearing up next week and I have to say that most of these titles have loosened a bit.  Last year’s 1-cour series were ending on thirteen episodes rather than twelve and most of what we had this season bring their stories to a close at this mark.  For Rolling Girls like I’ve said before it has so much potential to be a genuine adult/kids series with fantastical elements intertwined.  After seeing this I’m a bit disappointed how an ex-hentai screenplay writer Yasuyuki Muto [Bible Black, Afro Samurai, Galaxy Railways: Wasurerareta Toki no Wakusei] crams everything together for the final act.

The pirate queen Shima in still the villain throughout most of this but we get her backstory in under a few lines–  this is a atrocious writing.  Why she goes through all the trouble of stealing the Takumi’s ‘sacred object’–  not a single bit of what it is happens to be explained.  However, the former Mom-han singer Kuranosuke re-introduces a theme to Yukina’s drawings in a pretty large way here.  Do what you love without stopping which we saw a lot of in the previous episodes’ Bests and their commitments or rather promises made to make the districts much stronger.

Another is Masami.  She has been worried about Nozomi since the very beginning and this episode considering how badly constructed it is didn’t leave this out.  I feel that without having a stone deepen those moments between the two of them quite effectively here.

The lack of fighting from the previous two episodes more than made up here–  very flashy and wildly rambunctious between mecha fights and an all out punching match between Shima’s assistant and Kuranosuke.  The designs in this are fantastic especially the designs of the ships [Space Dandy writer and artist Hiromu Shimizu!].

Running at all ends by the middle of this episode we had quite the hurried resolution in the second half without much of a detailed explanation of Takumi founder being the doctor and Chiaya’s departure from the other girls feeling lacking.  This is a brief goodbye that tramples on what they’ve developed as friends over the court of their journey.  Bad writing and production to a very inspiring entertaining wacky series.  Someday I hope that this series is revitalized with much more to explore because this is way too short with how much was developed initially.  Frankly this series deserves a better ending than this.

On a positive note the music is fantastic especially towards the end! The fictional band that uses the reoccurring song “Stones” just released their single on iTunes JP which you can purchase here.

The ending credits depicts everyone’s future after the girls’ adventures and I like how Yukina becomes an artist, Ai climbs a mountain illustrating how much she wants to become stronger.  Kuranosuke’s narration in that entire scene is probably the best scene out of this entire episode.  It speaks a lot when these stones illustrate the take away of Rolling Girls.

To have friends with fun adventures and achieve great things in life.

Getting there though is what grounded Rolling Girls to have a bad ending. Rushed and unfocused.