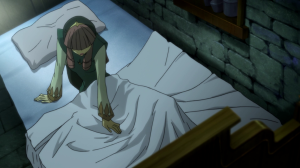 So as it stands Garo is slated for only 24 episodes.  I hope we see more of this in the future because this is a fantastic view of nobility mixed with horror as a backdrop!

While this episode of Garo could have come across more solid it would have been better to place this episode towards the beginning of the series when we are just learning about the kingdom.  Considering how it focuses on Octavia’s loyalty towards Mendoza.  Octavia is a fascinating character because while this show over the course of its run used the importance of sex and passing down your lineage as the backdrop behind the morality of its character.   This episode jumps into the religion aspect of 17th century Spain with a flashback, Octavia’s in particular.  Being raised in a poor household her parents chose to be persecuted by the notion that God would save them from the hardships that they have endured.  Garo actually represents itself here with similarities to Yuri Kuma Arashi—  the persecution of women and sexual identity.  As a woman, Octavia discards God in favor of a new one–  Mendoza and this is where we see how her decision to be at his side unfolds.  With the foot in the door as a maid within the King’s most unlikely servants illustrates her personality really well–  she’s deceitful when she has to be.

As for this episode, I think the character that steals the spotlight here is Laura.  She represents every human character in this show that is naive about the evils of the world in a cute way.  She’s funny because she’s clumsy and its her smitten personality towards Prince Alfonso that makes even Leon’s relationship with Lisa that much stronger.  Not to mention how her death has placed a dutiful impact on him as Garo.  Ema isn’t in the dark about what’s been going on with the Horrors and I like how she doesn’t let go the fact that Mendoza being alive sends a message that could ruin humanity in the future.  To sum it up everyone in the Order is aware of Mendoza’s plans it seems.  Garm should play an interesting role in the later episode.

The string Ema uses represents this fact greatly and with Octavia being caught up by the Knights and Alchemist it still manages to surprise me even right to the very end with what happens to Laura.  It really is a shame this episode couldn’t have been placed much earlier on simply because we haven’t seen much of Octavia and it feels like the creators were running out of material to use at this point in the series.  Her devotion is ruthless and very frightening–  tossing Horrors out without a sense of regret [until a bit later] ripping Laura in half is one way to develop her character.  The first time we see Mendoza is quite the shock–  he’s aged and its interesting to see how creator Amemiya will handle this turn of events.  If there is a part of this episode I didn’t like its how quickly German turns into somewhat of a villain to Leon.  Good cliffhanger but abruptly developed considering we haven’t seen German and how he works with Mendoza at all.

Octavia’s disillusionment with God and Laura’s simple-mindedness about the ways of the world [which ends up getting her killed] is what marks this one of my favorite episodes of Garo yet!