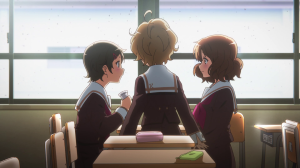 I may have mentioned this before but P.A. Works and Kyoto Animation are my two favorite fluff studios.  You’re probably wondering what I mean by that.  Out of everything I do watch every season I like to find at least two shows that are purely entertaining visually.  K-On! while it is a perfect example of moe developed into a very good series about girls starting a band, drinking tea and eating cake.  Anime that contain fun in-depth ‘growing up’ adventures between friends.  Hyouka was one of my favorite series by this studio that actually offered in intellectual side of high-school by taking students and having them solve small-time mysteries in a very realistic way!  Hibike!  is another step into this stylistic direction.

What attracted me to this show is that I played the euphonium in high school and so the story has a strong personal connection to me.  I’m curious to see how deep Air director Tatsuya Ishihara will take this show with its music considering how the novel emphasizes it more than any other aspect of the story.

The animation is stunning and I love the font they used on the opening credits reminds me a lot of how Kyoukai no Kanata‘s ending sequence had been but with more pizazz.  Kyoto Animation is good at staying with a trend–  4 girls becoming friends and establishing a life-long bond over a specific hobby/activity.  Take note of the sound in this premiere we’ve got a sweeping performance that is plain bad and Kimiko notices this from the get-go.  Fantastic scene!

Taki Noboru’s introduction is one of my favorite scenes–  he’s seen at a shrine listening to Kumiko and Reina’s middle school performance.  The situation that tore them apart and he will somehow be the string that ties them back together.  Foreshadowing their concert band!

Here its with their discovery of band and what develops between them.  This episode is so intriguing in how Kumiko Omaeis multi-layered–  she loves music, she regrets hurting her best friend Reina and yet she harbors an inner irritated attitude.  Her relationship with Shuichi Tsukamoto is played with this on so many levels!  There’s definitely going to be realistic interactions between this cast and this episode is a great introduction into that!  The novel is filled with music and drama and this gives us a taste visually of the slice-of-life aspect that Studio Kyoto and Red Garden and Kuragehime writer Jukki Hanada excel in.

I’m not sure I’ve heard of this band but their sound is fairly generic and somehow it works for how lively the animation is.  The drawings are beautiful and have a film-like quality to them.  I just hope this doesn’t reflect how the creators handle the adaptation of this work overall.

The main cast handles the singing of this song that has a slight ska sound to it.  It’s   The animation just like it’s opening counterpart is fantastic and it reminds me a lot of K-On!‘s ending 2 animation effects like the emphasis on lining out the characters with dark shadows and a blur effect.