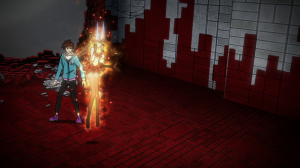 Yes. I’m covering this show.  I don’t care how far behind I am on the previous two seasons.  This series has a wonderful second episode that gets me absolutely hooked for more!  I saw this way back in 2011 and a lot of what I remember is a bit fuzzy.  It’s always good to go back and re-watch a series for this very reason.  Plus its in line with why I started this blog in the first place–  categorizing anime.

There’s so much creativity being thrown on the screen when these supernatural financial battles take place that it leaves me wanting the runtime to be so much longer per episode! What makes this episode even better than the previous one is how honest it is at delivering a realistic main character.  Kimimaro is an ordinary college student with troubles of his own being put into a dark situation that could change his future forever.  As well as the state of Japan’s economy.  This show does have its flaws in terms of animation:  there are quite a few scenes where the character designs are sub-par from what we had previously seen in the premiere.  On top of this the CG just screams that Tatsunoko Productions didn’t have enough budget for this show overall.  Regardless, Nakamura and original creator Keiichi Satou [Karas, Shingeki no Bahamut: Genesis] make a fascinating narrative about how money can change people.

What helps make Kimimaro such an intriguing person is how desperately scared he is at winning–  summoning Msyu right off the bat is a strong indication of how new he is to this game.  He doesn’t suddenly gain a power like most series fall victim to–  he makes mistakes gets his butt kicked and Msyu tries to get it through his thick skull that it’s not just about the fighting.  You have to play a strategy with your asset and money to win the battles.  It’s great to see how the director brushes off any notion that he’s going to win against Soichiro and then completely reverses it by winning the deal.  This is a good learning experience for Kimimaro in how to manage his Midas money wisely now that he’s got a ton of it.

As little as we’ve seen of Hanabi here it’s nice that she pushes this truth even further–  prepare for the worst case scenario.  Being able to see who uses Midas drives home the idea that how money is spent can change people’s desires.  The thug at the end is generic but initiates this point down to a tee.  Mikuni is a power player in the underworld and I like how his interest in Kimimaro having won his first game contrasts how frivolous he flaunts his currency!

Kenji Nakamura where has this director been hiding this past year?  Granted he didn’t conceive this series at all.  It DOES certainly have his style written all over it.  It’s ambitiously honest with its mindful characters being surrounded in perplexing situations.  Looking forward to his work on Gatchaman: CROWDS Insight for the summer season.  I enjoyed this first season a lot.  I’d really like to see him direct an original josei work.  I feel he’s got the subtle direction to pull this off.  Detective josei series?  Come on Nakamura!

I’ve also got some pretty big news.  I’ve been in contact with Funimation about obtaining screening permissions to run a Space Dandy marathon among other series and feature-length films.  I’m awaiting on approval for this to happen.  As of right now I run a small group on Tuesday evenings that focus on shows specifically per season.  Once a month I host a feature-length film with prizes.  Hopefully getting a larger venue will draw in a bigger crowd of fans.  It’s always good to get together with people that have different ideas about Japanese anime.  Hope this works out.