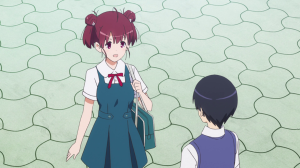 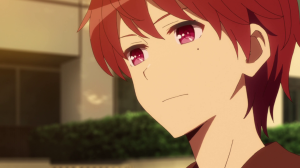 Is this the first time we’re seeing an A-1 Pictures series that has been so well-animated receive a drop in quality?  Cinderella Girls a somewhat spin-off of Idolmaster constantly is under-budget so I would have thought this series wouldn’t have received an episode that had so many out of place drawings.

Nonetheless, this episode gives gives off a decent balance that there is actually going to be some competition within the doujin world.  At some point we should see a comiket appearance by Tomoya.  Something I’ve mentioned before is how toned down this series is in delivering the harem tropes of this Saenai—  as we get this heavy worn out scene between Eriri and Tomoya trying to complete her doujin work just in time to meet deadline.  It’s highly understated in content yet comes off very refreshing because it’s underlining meaning is all based around an 18+ work by an author that isn’t even of age yet!  This entire sequence really lays the foundation for Izumi’s introduction as she considers Tomoya the man that made a woman out of her–  really nice to see how deliberate the dialogue is here because Eriri and Utaha are obviously perplexed and agitated by another woman in Tomoya’s life it also comes back to the fact that Tomoya really is an otaku.

The animation might not have been as good as any of the other episodes thus far but at least there as some decent writing in between.  Katsuyuki Kodera directed this and I must say its definitely a step in a different direction than anything he’s ever worked on especially with  2000’s Sci-Fi Harry and Jigoku Shoujo.