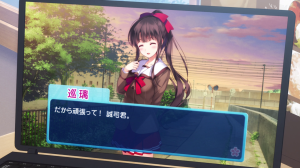 This is rare.  The final episodes of Saenai are broadcast back-to-back.  The Episode 0 and now having a 12-episode run on Noitamina?  What is going on here?  In the past couple of years I’d say around 2010 the programming block received an additional timeslot–  this can either hurt and help them in the long run.  We’ve had a couple of poorly produced series since this block got two shows per season however we’ve also had tons of amazing series in this too!  Sanaei is very unconventional in delivering a harem series and now I can clearly see its this case with the production of it too–  using an OVA fan service episode from the get-go is definitely a different style to introduce its cast.

Since we’ve had the Eriri and Utaha’s arcs fully completed its time for Michiru to shine and these two episode added a nice spotlight to otaku outside of the realm of manga with attention focused on music.  Megumi also receives the attention she deserves as she’s learned a lot in tsundere personality type Eriri and yundere Utaha in that she’s level-headed.  She’s a mix of a lot of characteristics that most japanese works featuring girls fall into but comes out alive from it.

The sourness from Eriri and Utaha finding out about Michiru being a closer childhood friend to Tomoya separates exactly what he wants out of Megumi as the main heroine without shoving information in our faces here.  Great to see!  Probably the best part of this is how the creator’s built-up Michiru’s band —  their problematic and Michiru worries that they would shun her for being involved in an otaku endeavor. 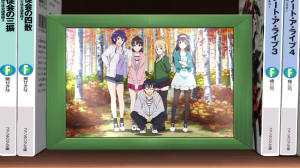 The entire scene from this episode where Tomoya reveals that her band is originally involved with anime is priceless! Quite the unexpected route.  It illustrates how playful this show is–  camera angles of Michiru straddling Tomoya [aboslutely loved Eriri and Utaha’s reactions to this!], the generic and unfortunate to Michiru backstory around the Icy Tail, every bit of this came together so smoothly!  The icing on the cake though is their performance of Sorairo Days which happens to be another the song from the anime Tengen Toppa Gurren Lagann!  I like how this performance of theirs gives life to Michiru and the passion she needs to have in helping with Tomoya’s dream of creating the best dating sim game ever.  The animation isn’t as good as performances in Haruhi Suzumiya or Space Dandy but does in fact get the point across that Michiru is destined to be a part of Blessing Software.  As well as give us a good look into what Michiru is actually like outside of her sociopathic behavior.

While these two episodes didn’t provide any conclusion whatsoever it did give just enough push to make this series further up on my list of good anime series.  Can’t wait to see more of these girls’ interactions in the second season and how they come up with the development of the game!  Much better than last year’s Spring moe-mystery series Nanana.