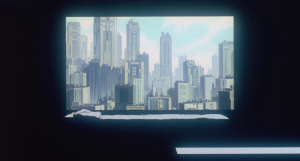 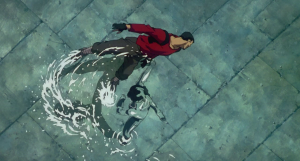 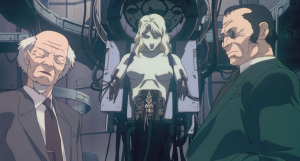 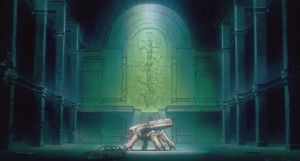 I got a chance to see this at one of my local theaters this past Saturday in Japanese and I figured what better way to tie-in my favorite composers than to talk about a film that includes one of them in it!

Mamoru Oshii.  Anyone that watched anime between the 80’s and 90’s has probably heard his name before.  He’s insanely popular in the world of sci-fi storytelling as his works tend to have a more psychological feel to them.  He wrote what is considered to be the first OVA ever…Dallos.  1983 was a huge year for him because he not only co-wrote Dallos but worked on his first major feature and television series on Rumiko Takahashi’s Urusei Yatsura!  What separates his films from most other anime directors is that he uses a montage set against music which for the most part is Japanese influenced–  taiko, shimasen and min’yo are mostly prevalent]  throughout that typically lasts between 2 and 5 minutes–  in order to capture the atmosphere around the story.  This is also common in the Patlabor film series and in the late 80’s wrote/directed The Red Spectacle.   A fantastic film that I highly recommend to my readers looking for something outside of anime.  As some of you may have read from my previous post about composers–  Kenji Kawai wrote the soundtrack to Ghost in the Shell.  Intelligently written and a very soothing collection of pieces throughout!

Ghost in the Shell is based on Masamune Shirow’s manga and this adaptation really put Mamoru Oshii on the map in popularity among anime fans worldwide.  The backdrop that he used in coming up with a futuristic setting visually was Hong Kong and it’s clearly seen in the city throughout the film!  A wonderful story that mixes sexual identity against a cyberpunk futuristic landscape!  This is probably one of the most well-known animated films of the 90’s and after seeing it on the big screen [japanese language with english subtitles]:  rightfully so!  While this film doesn’t jump into any background on the main cast of Kusanagi, Batou and even the section chief Aramaki.  I believe that is where its strength lies simply because this is meant to be more of an introductory pieces that focuses on one idea:  building up a world around technology.

Visually breathtaking during its time due to Production I.G.’s massive budget for the film my favorite scene in this is where an optical-thermal camouflage Kusanagi fights the dealer as he’s escaping Section 9’s pursuit.  Incredibly detailed animation with the water flying upwards!  I think why I like this movie so much is because its straightforward about an organization catching a bad guy–  the hacker switching bodies, philosophical conversations about the body and soul and the cyberpunk character and background designs are just a nice bonus to this police crime film.  It’s too bad this couldn’t be longer in its runtime the setting is wonderfully built-up and leaves the viewer wanting so much more from its rather under-developed Section 9 cast.

The dialogue between the Puppet Master and Kusanagi reveals a lot of what this film elaborates on–  finally the reward shows up after all the chase leading up to it!  The Puppet Master after being created by Section 6 becomes self-aware and yearns to be a part of humanity.  Ghost in the Shell share similar themes to last season’s Garo about passing on genes and how people view the idea of being alive.  A robot that target’s human hackers only wants to be more human himself is a powerful message that is a nice setup to the eventually television series we would receive in the early 2000’s. 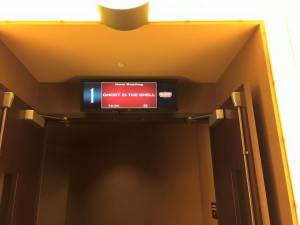 On a more personal matter I’ve been working these past few months on acquiring rights to Space Dandy and I’ve received the official go ahead!  I’ve been in contact with a theatre and they are quite enthusiastic about the idea of me hosting a marathon of this series with raffle prizes.  Just waiting to hear about the confirmation on the specific dates I’ve requested.  I’ve been looking over official paperwork and I’ve been allowed to screen over 100 titles including Mushi-shi‘s first and second seasons!  Talk about a series that would look beautiful on the big screen!

1 thought on “Ghost in the Shell [Theatrical Edition]”