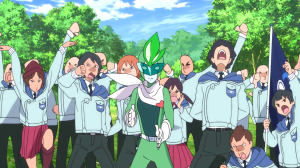 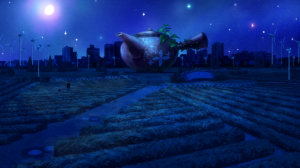 The watercolor art style  by Eriko Shibayama and Ryou Kouno created some of the best background art I’ve seen out of any other series from the Winter 2015 season!  Eriko Shibayama is a very talented artist that I feel is one of those artist that if you see  their work you know it’s them.  Shibayama worked on Masaaki Yuasa’s Space Dandy episode 16!  I really can’t wait to see what these two animators will be working on in the future!

Along with the amazing art another big reason why I like this series so much is because of how diverse the episodes are. Rolling Girls uses the idol singers concept a bit further by adding a fantasy spin to it.  Nozomi, Chiaya, Yukina and Ai progress through their journey of finding heart stones that build upon a couple of larger themes:  coming-of-age friendships and establishing peace not just in Tokorozawa but the other Districts.

This anime really shines in its characterization of it’s minor cast–  about every two episodes or so we are introduced to a new district with different Bests handling their own problems in their own ways and for most of the time it doesn’t work out until the girls show up as a kind of peace treaty in closing up each arc.  I really wish that this series didn’t even have a main story–  I’m a huge fan of episodic shows and Rolling Girls had some really amazing episodes that capitalized on this style of storytelling.  Mie Motors arc and the Kamogawa Rockers arc were both incredibly different from each other yet still held up with some similar themes–  traditions of Japan tarnished by selfish ideas from a mob.  It isn’t about the main cast receiving development but how they would help grow the people around them–  these individual arcs were a perfect example that fitted how to blend long standing traditions of the old with generations of the new.  The stones which is revealed in the finale layers up the concept of people’s potential in doing something great for themselves, for others.  Just as the tagline for the series states.

These girls in a sense, even though Nozomi wanted to follow in Maccha Green’s footsteps, were their own mob holding onto the power of friendship as the key to success. This is why Rolling Girls can be such a delight for kids as well as adults!

However, the final few episodes were rushed because I feel that the creators really wanted to do something for the main cast which is why this show has such a haphazard ending.  They should have compiled that arc right from the get-go but instead used it as a climax that was less than satisfying.  About the only part which I may have mentioned before that I enjoyed was the very end with Kuranosuke’s inspirational monologue about how people can have the ability to draw out the stones.  Opening up for a possible sequel is one way to do it.  Shigatsu wa Kimi no Uso composer Masaru Yokoyama’s score there was very good.