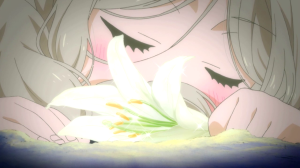 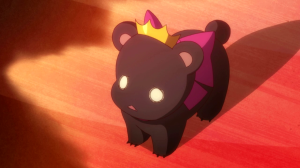 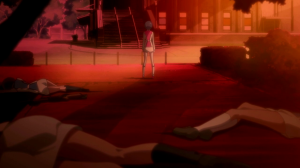 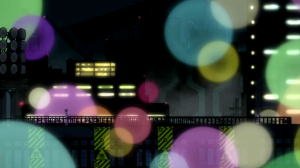 We’ve got a pretty new episode director with this–  I’m really impressed with this one here.  Yuki Yase helmed last year’s Mekaku City Actors so I can definitely see a few elements tied into  this episode with the obscure camera angles–  close up shots of the character’s body movements.  This does have some of the best music scores out of a lot of what we had for the Winter 2015 season–  Yukari Hashimoto is really amazing and helps elevate an already awesome character study about girls ridiculously well!  Director Kunihiko Ikuhara knows how to reel in an audience–  the repetition is for good reason especially with Sumika’s hair scenes and Ginko’s past (which we get to see more of here) all coming together.  I’m really glad that we actually get to see how Ginko and Kureha react to each other and the sacrifices that they make in order to be accepted into society.

Lulu being right about Kureha losing her memories about Ginko points out a great deal that these three girls are very much closely connected than I initially thought.  This is where the finally revealed camera angles come into to play–  the stairs but most importantly the roof of the school is a triangle.  I’d like to point out that every single time this rooftop sequence occurs is where one girl confronts another–  perhaps this is foreshadow that someone might not make it out alive.  Lulu is the sacrificial element that this entire episode needed in illustrating that Ginko and Kureha are destined together.  What’s interesting is how Lulu’s lustful desire for Ginko represents a bigger picture that that the love she never wanted to accept was in fact towards her own brother and he died.  “We hated you from the very beginning we loved you from the very beginning” really speaks volumes to a lot of the personal connections this anime depicts.  Lulu is considered a failure in her own eyes that the only way she could redeem herself is by living out someone else’s dreams but she came to fall in love with that idea and that person–  Ginko.  I like how its her brother’s Promise Kiss that provides the foundation for Ginko’s friendship with her and the death scene at the end here amplifies this immensely.  On the other side we’ve got Ginko and Kureha which they signify a hope of breaking out from society: which in this case is the student body class and the Life Cool, Life Beauty and Life Sexy.

So Ginko makes a trade with the Court of Severance in order to become a human.  She was shown as an outcast just as Kureha had been for being a bear.  I feel it’s this point that will be the crux of the finale of Yuri Kuma and another sacrifice [literally or symbolically] will have to be made.  This episode is all about a bear wanting to be a part of the very society Kureha is from and what Kureha may have to give up to realize their loving friendship as a reality.