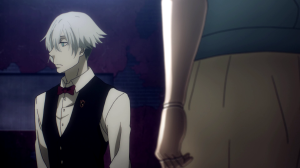 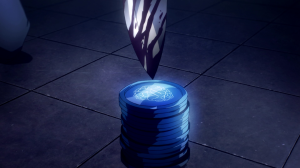 Perhaps I’m being too picky when it comes to Death Parade‘s finale.  I enjoyed it quite a bit and the conclusion to Onna’s journey was satisfying yet I wanted so much more. [sad that we won’t be hearing that groovy opening sequence again]  I really wanted this series to be episodic and channel its progress through the people that mysteriously end up at Queen Decim.  However, I do want to say that this series worked out extremely well as a week-to-week build-up narrative.  It’s incredibly awesome!  Realistically grim with its characters that adds in the supernatural elements with the various death games where we get to see how precious life is.

Rather than focusing just on its side-cast, Death Parade presents the dead as this sort of knot of human relationships that breaks just about every episode in order to build up the true intentions of this show:  what is that makes people human?  A question that Decim never would have thought of from an emotional standpoint if it were not for Onna.  Her past greatly enhances this question wonderfully and I believe where Oculus acts as the pendulum in establishing a power struggle within the staff is where we see this theme is explored from an Arbiter’s point of view more clearly.  Her desire to make Decim more human through Onna’s heartfelt experience as a side-kick arbiter gives us an emotional roller coaster ride with the help of some amazing animation by MADHOUSE!  The nod to Death Note‘s Light Yagami also represents how far this show gathers its dead people from.  Now lets see a second season of this with a Red Garden crossover!

Just a few days ago I re-watched this entire series.  There is a ton of foreshadow about the puppets being the humans that are brought to the bar and Nona’s plans.  I really like the part of this series in episode 11 where the puppets are clapping at the end of Onna’s skating performance–  a fitting send-off from QueenDecim and into another part of life after death!  Given that we see Episode 1’s Machiko in a later episode as a puppet I would venture to guess they were clapping as foreshadow that she would become a puppet herself.  Glad the ending left that portion of the story open.  It’s these final glimpses of a person’s life that Death Parade achieves near perfect in terms of character development–  Chisato’s real appearance as the elevator doors are closing, Yousuke crying over the fact he killed himself, Shimada’s obsession with avenging his sister by killing Tatsumi again, the desperation Maya has in being with Harada in her final moments and most importantly Onna crying over seeing Decim genuinely smile.  All these situations portray regret, compassion, anger, hatred, and so many other emotions wonderfully well throughout this series which is why these final moments in these characters leave such a huge impact each week!

I sure hope creator Yuzuru Tachikawa can make another one of these just as good as this one if not better!