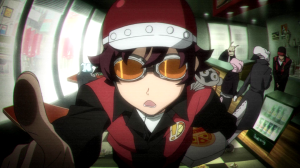 Dare I say this is close to Space Dandy for me?  Perhaps I’m speaking way too soon.  This show is marvelous. And a stylistic masterpiece!  It’s quirky, but not Masaaki Yuasa quirky more like Ryōgo Narita’s quirky.  Visually and story-wise it’s rambunctious and portrays New York city life really well.  Kyousogiga director Rie Matsumoto gives life to Nightow’s manga with her off the wall style–  wide open shots of the buildings to sparatic transitions with definite intentions of close-up camera zooming of objects and characters!  This show doesn’t lose a drop in motion one bit!  Thank you BONES!

Two worlds are constantly clashing against each other within the same city and we saw it in the premiere especially with Zapp’s battle and now this episode really pulls out the crew of Libra by taking it to a new level of coolness I’ve not seen in quite some time.  They’re all really distinct!  Zapp is a womanizer whose got a knack for beating Leonardo up to a pulp–  that beginning with the camera monitor was really funny!  Chain seems to be more on a much more tolerable in her aggressive behavior than Zapp–  their relationship is fantastic.  Klaus uses Zapp here as a buffer in protecting Leonardo from the power that ultimately gives his kidnaping situation some substance.  Klaus may be the leader of Libra but he doesn’t know a thing or two about bringing friends together.  Haha Steven’s comment was great!  Steven Starphase is probably the most normal out of the group–  he acts as a sort of informant for Libra.  I like his character he’s a nice contrast from all the craziness this episode had–  his ice power is really neat to see.  The aliens are comically ruthless–  abducting humans for food and having them vacuum sealed.  Leonardo’s eyes made their entire encounter extremely humorous and highly action-packed!  Not to mention the Sonic Speed Monkey!

The soundtrack is the best out of anything this season is offering!  It does a fine job in weaving itself well inside the story where the score plays several homages to classical American music culture–  the ambient jazz delivers a strong weight to Kekkai Sensen.

With the ending sequence focusing on Leonardo’s encounter with the ghost White–  I feel as this show is more of nice teaser of the manga.  White is an original anime character and from what I guess she will be pivotal in progressing Leonardo’s story in the city.  Femt of Depravity might be the main villain of this series but I really see this 1-cour show derailing due to how many chapters Nightow has done for this show in comparison to how many chapters each episode has adapted so far.  I hope the ending will be open for a sequel!

The English dub is just as impressive as the Japanese dub for me simply because Space Dandy‘s Ian Sinclair voices Zapp!  He’s perfect for this role!  Leonardo gives an innocent sound to his character in both the English and Japanese that does have its edgier moments! 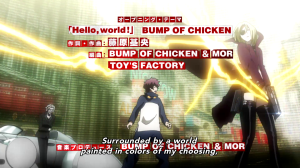 Best opening of the season.  Visuals are top notch and the paper cutting and photograph effects are amazing.  All the transitions flow nicely and Bump of Chicken’s rock instrumentals depict this show’s flavor for intensity amazingly well!  I can’t get enough of this song! 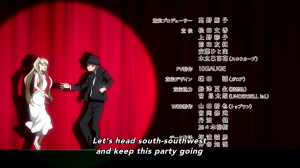 Holy cow!  This ending is the best ending I think I’ve ever seen!  Portray the crazy adventures of Libra in a very comical classic way–  drunk dancing.  Can’t wait to see the creditless version of this!  The animation is really really good–  Leonardo’s dance with White was jaw-dropping! The song is so amazing!  It’s really catchy and Unison Square Garden’s Kosuke Saito gives a very upbeat sound against the jazz-like rock session between the other band members!  The entire ending oozes with such a smooth cool style!