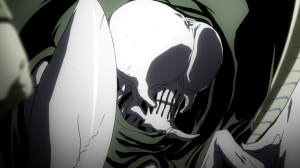 Space Dandy‘s episode 23 [Lovers are Trendy] director Masahiro Mukai probably helmed one of the most satisfying episodes of his career with Kekkai Sensen here.  That chess game was really intense.  Mardock Scramble had a very intense blackjack game that lasted more than 20 minutes and is one of the few series that I can remember in recent years to actually pull off an engrossing game.  I had a similar feel here even though the game didn’t last as long.  Director Rie Matsumoto is becoming a distinct storyteller–  I love her camera angles and it works extremely well for Kekkai Sensen considering it has crazy humans and aliens where the backdrop uses New York another world colliding!

With the introduction of K.K. and the focus shifted on Klaus instead of Leonardo we get a better idea of how Libra operates and the man that leads the organization.  I feel like K.K. in this episode plays as a beloved bodyguard-for-hire that loves Klaus.  Her comment towards the end pays great respect to their relationship.  Their chemistry is incredibly awesome!  Come to think of it that’s something Kekkai Sensen does wonderfully.  Without any explanations of its characters through information dumping the story tosses them into situations giving us the viewer a better understanding about their personalities and motives.  Zapp had been more of the previous episode where this time we get Klaus and K.K..

In order to obtain information about Angel Scale and discover the mysterious behind people dying under this new drug–  the team discovers that people in the otherworld may know some answers.  Klaus’ online chess game ends up being solid foreshadow in his inevitable game with friend and alien Beyond mob boss Don Arlelelle.  I believe this is the first time we see that getting answers in a distorted New York between worlds can have very bad consequences.  With how subtle this episode had been in action it certainly made up for its background designs [The Prosfair room is gorgeous and acts as an hour glass gradually pulling on its players lives]  I really like how simple this is by the use of a chess game and the classical music!  There is a lot to be said of the music choice in this show.  The jazz score is well-versed in its New York setting–  taking homage after homage of popular jazz pieces and creating this build up of hesitation in order to piece together a nice conclusion each episode.  The classical pieces that are put into this are a nice breakaway from the zaniness this series initially presents itself with.  It’s relaxing [like a Mushishi episode] and yet I feel mildly entertained when these transitions happen.  Beethoven’s 9th symphony during the games between Ulchenko and Klaus were a good choice to pull of the disparity between the actions of Libra and how the gather information.  Not to mention the nice build-up to the finale of Ode to Joy depicting Klaus’ nature to help others without hesitation.  He’s driven to play a good game against Don Arlelelle, getting the answers about Angel Scale and rescuing Ulchenko.  Such a satisfying episode about where friendships, courage and sacrifice!  Now I can see why everyone at Libra respects him.

I’m currently reading the manga and I think what I find most interesting about this anime adaptation are White and her brother.  They’re original to this show and White seems to be depicted as a kind of love interest to Leonardo.  As for the rest of this episode we get more in-depth on White’s character–  she’s trapped in the hospital so to speak illustrating her innocence while her brother is out on the town with a very uneasy interest in Leonardo’s eyes.  Great set up for a main anime original storyline–  good teaser for the manga.  I really do hope we catch a second season of this!  Also I cannot get enough of that ending sequence–  it’s quite hilarious!

This was the most classy episode of Kekkai Sensen yet!