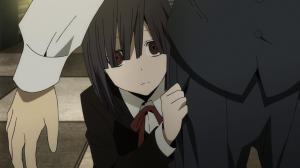 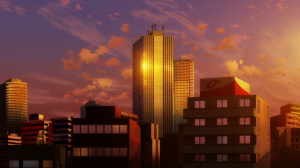 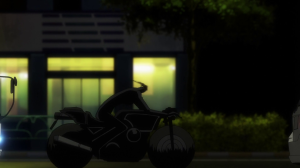 Studio Shuka has done a decent job in animating this series: we’ve had some fluid action sequences in the past few episodes,  but it definitely isn’t as good as what Brain’s Base did on the first season.  That season was so much darker, the character designs by Noein‘s artist Takahiro Kishida are less re-fined this time around.  It doesn’t affect my viewing too much but I sure miss scenes like this one.  Beautifully detailed on the background designs and Anri’s running was spot on.  I will say though it was smart move on a Brain’s Base producer of the first season of Durarara!! to establish a brand new studio (Shuka) in handling the rest of this.  This is probably why a lot of the animation staff remain the same here.  Brain’s Base doesn’t typically do another season for a show so that’s probably one of the biggest reasons why they didn’t do x2Shou.  If I recall the only time this had been the case was for their first animated work ever in 2002: Daigunder.  I believe that had a total of 39 episodes.

Picking up right where we left off–  Celty soon discovers in a grim sense that she’s in love with Shinra just after having faced death by the mysterious rider.  Nice way to tie in Shinra’s side of the story where Shizuo escorts the young girl to his place and give his side of how he feels about Celty.  It’s this style of storytelling I like a lot–  backpedaling with the different characters stuck in various situations all leading up to the girl Awakusu Akane. The yakuza-inspired group Awakusu is led by Mikiya and really wants his daughter to come back home.    I feel this guy is quite scary but to make matters worse is the group Sloan and Varona.

While Sloan offers a more comedic side to their work Varona is the more silent-type:  I really like her character.  Now that they’ve been asked to kidnap Akane I can clearly see how they are being woven into the story of x2Shou.  This episode delivers on establishing a face off between Varona and Celty similar to Ruri’s obsession over Celty.  I get the feeling Varona is somewhat curious about the black rider’s (Celty)  abilities and it’s nice how they use straight up cellphone video footage to get this point across.

For most of the first season Ryugamine acted as the lead character and finding out towards the middle of the series that he’s the Dollars’ leader just makes the interactions between him and Aoba very intruiging–  especially when Masaomi warns him through chat that something doesn’t feel right.  Just shows that their friendship is still pretty strong even after the Yellow Scarves incident in the first season.

It might be a bit confusing how the timeline is setup here in that the ending to last episode we see  Varona encounter and lopping off Celty’s helmet and by the second half of this episode as more of a recap in order to build more strength to the follow-up scenes.  I really like how Celty trails Varona with her black string and leaving the viewer wanting even more to the next episode not to mention that cliffhanger with someone breaking into Anri’s room.  So much is going on around the city and this season focuses on a time jump narrative.  Interesting.